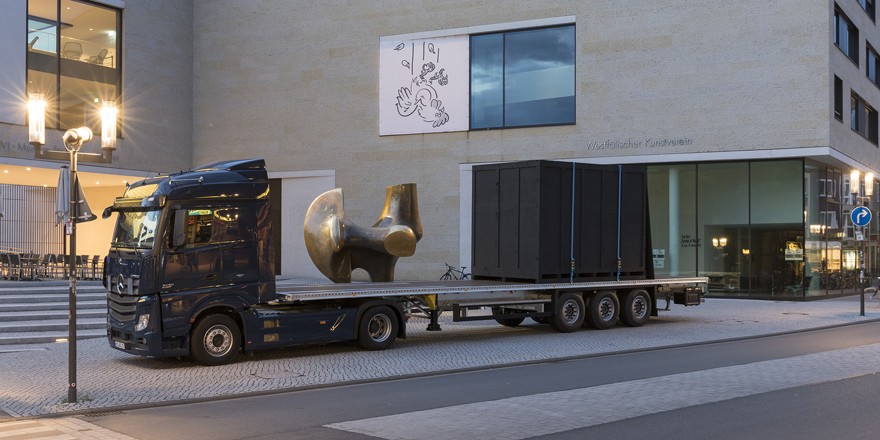 Skulptur Projekte Münster 2017 participant, Cosima von Bonin has been looking forward to a collaboration with the American sculptor, Tom Burr, whose show at the Westfälische Kunstverein "Surplus of Myself" is taking place at the same time as the Skulptur Projekte 2017. They have known one another for a long time and both value and respect each other's work very much. The pretext for the project is the situation on the forecourt of the museum and the Kunstverein an der Rothenburg with its group of sculptures: Otto Piene's light installation "Silberne Frequenz" (Silver Frequency) (1970/71, 2014), Ulrich Rückriem's "Granit (Normandie), gespalten, geschnitten, geschliffen" Granite (Normandy), split, cut, polished" (1985) and finally, Henry Moore's bronze sculpture "The Archer" (1964/65) from the collection of the Neue Nationalgalerie Berlin, which was installed on the forecourt of the museum last autumn and will remain there until 2019. In a provocative gesture, Cosima von Bonin will placed an articulated lorry with a flatbed trailer alongside the sculptures, purportedly in readiness to transport art. Tom Burr intends to make a sculpture in the shape of transportation crate, which will be placed on the flatbed trailer. This crate (measuring 4 x 2,5 x3 m) has been made from plywood, which has been painted black and corresponds roughly to the dimensions of Henry Moore's sculpture, suggestion loading is imminent. In combination with the sheer brute size of the articulated lorry plus trailer, this "black box" is a reference to Moore's sculpture as a piece of classical modernist art: it can be taken as the efforts of a younger generation of sculptors to emancipate themselves. At the same time, this intervention turns our attention to the way the space has been designed, to the effectiveness of public space sculpture.
www.westfaelischer-kunstverein.de