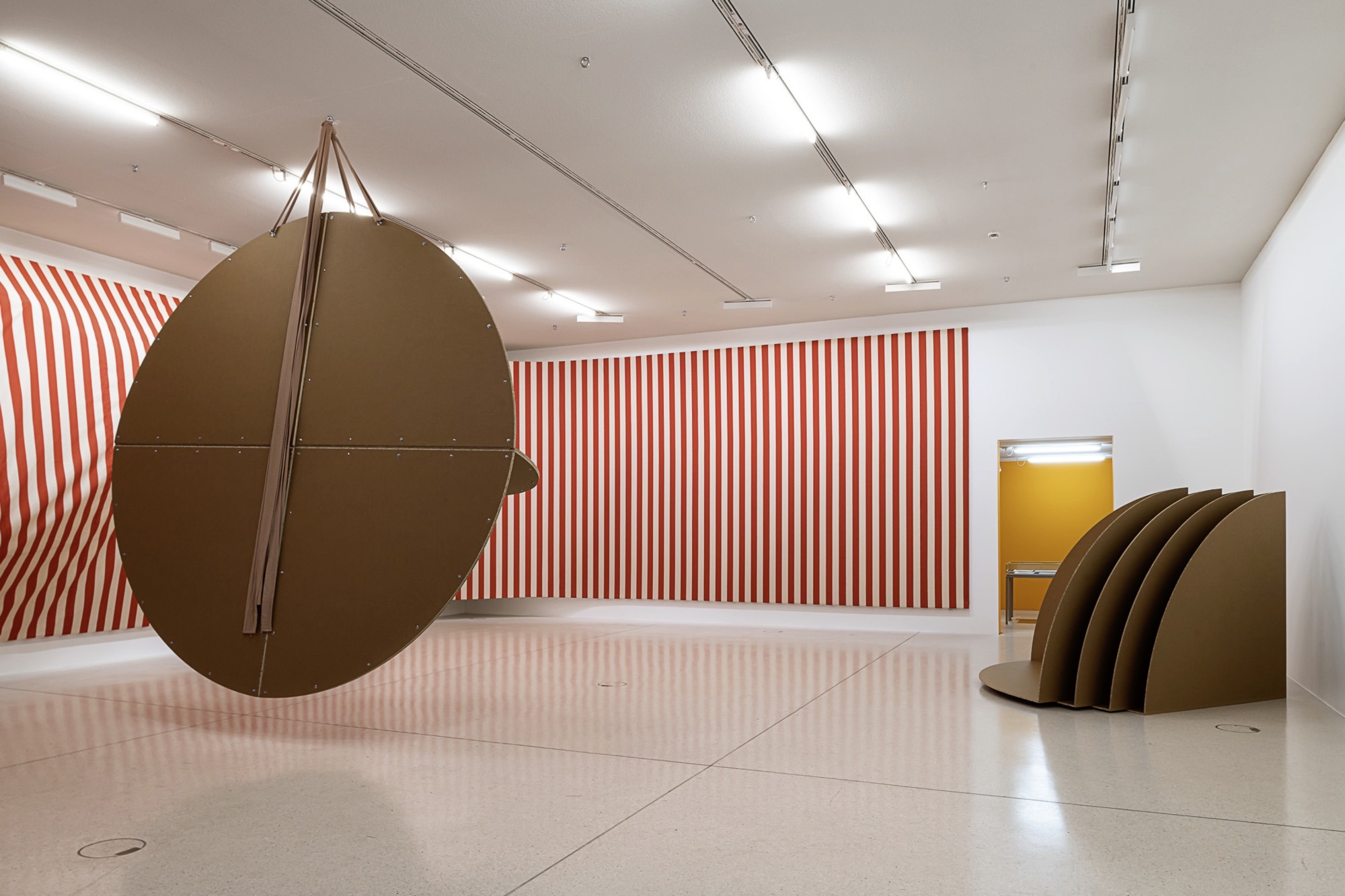 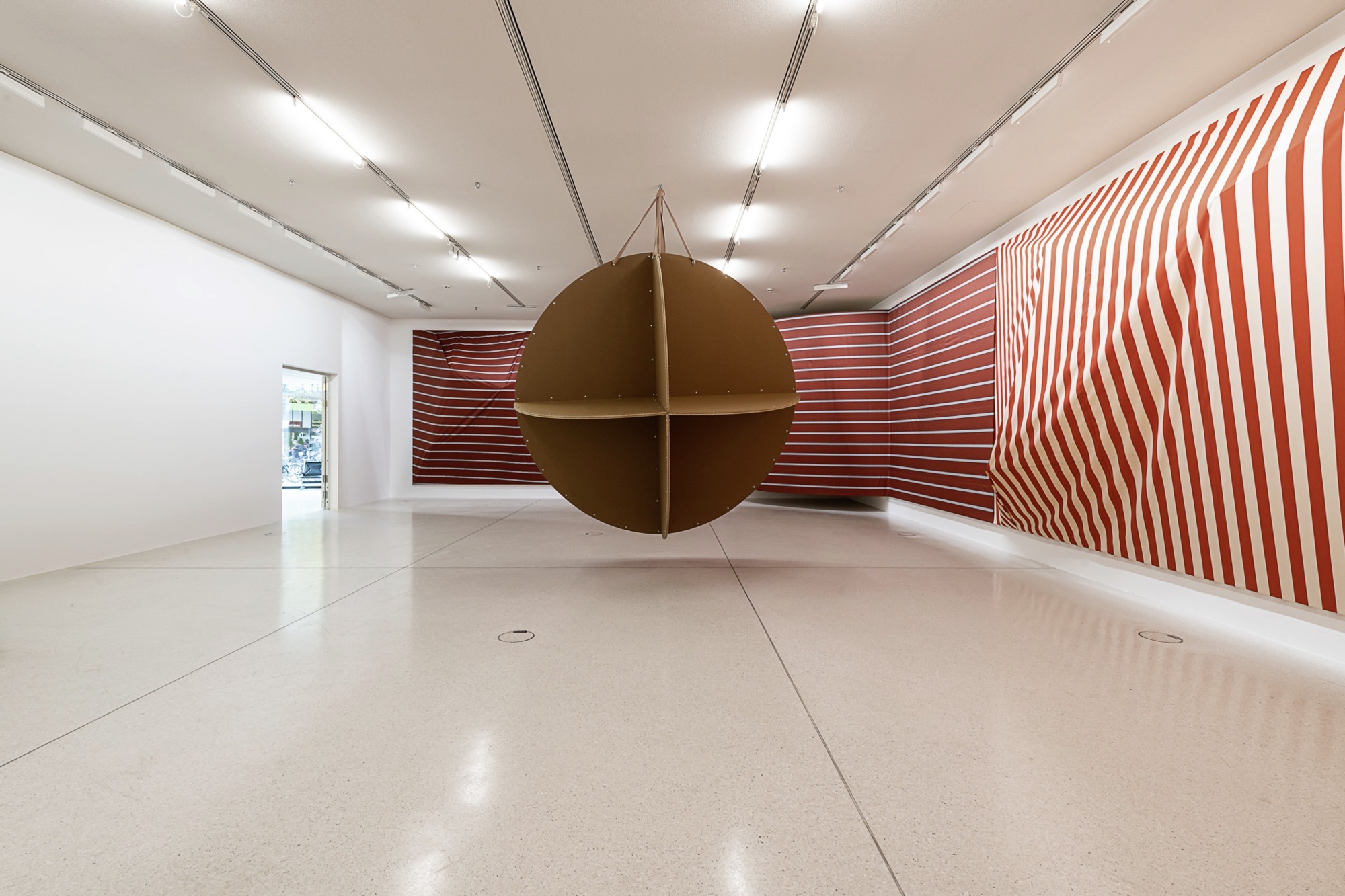 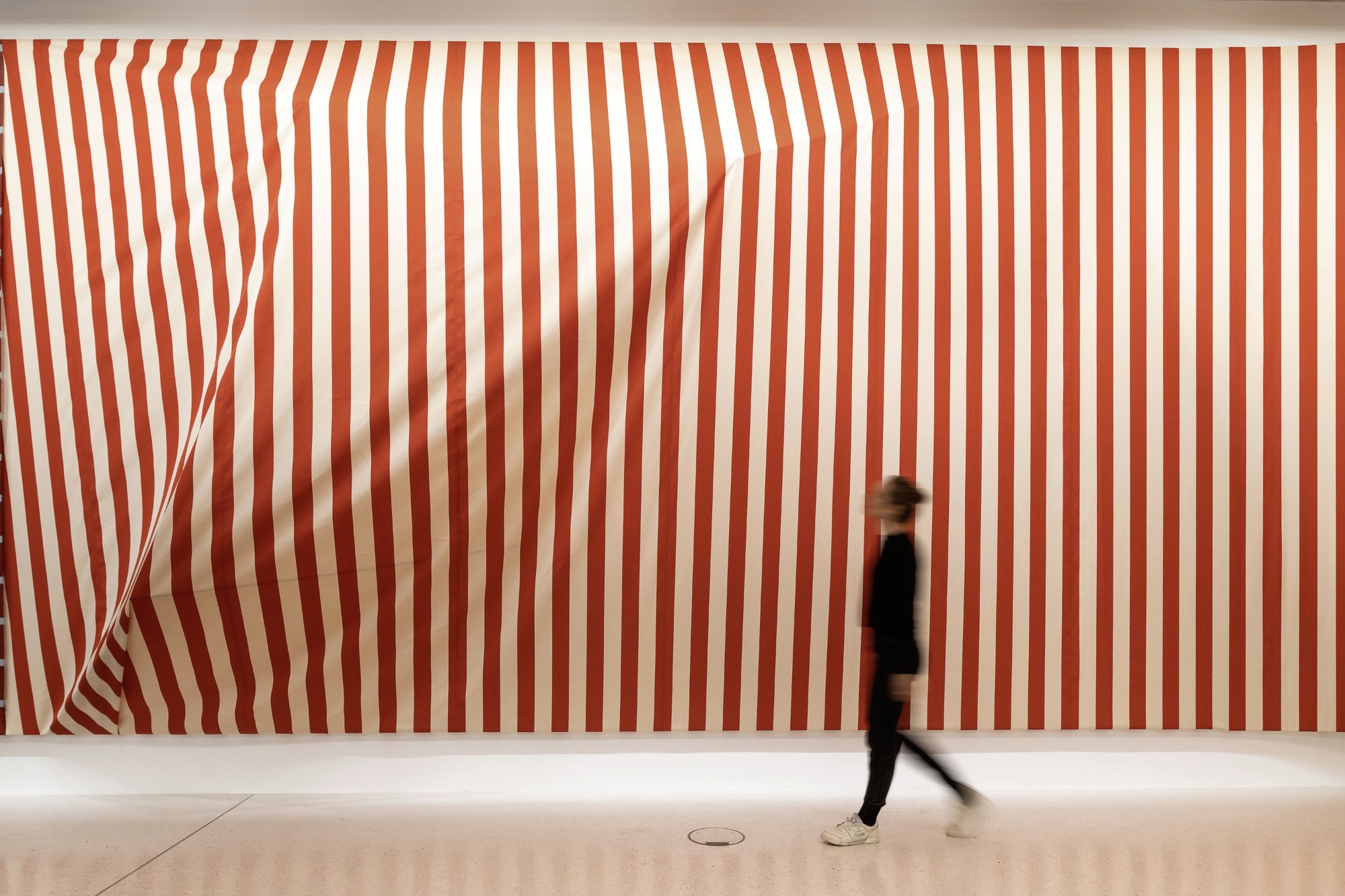 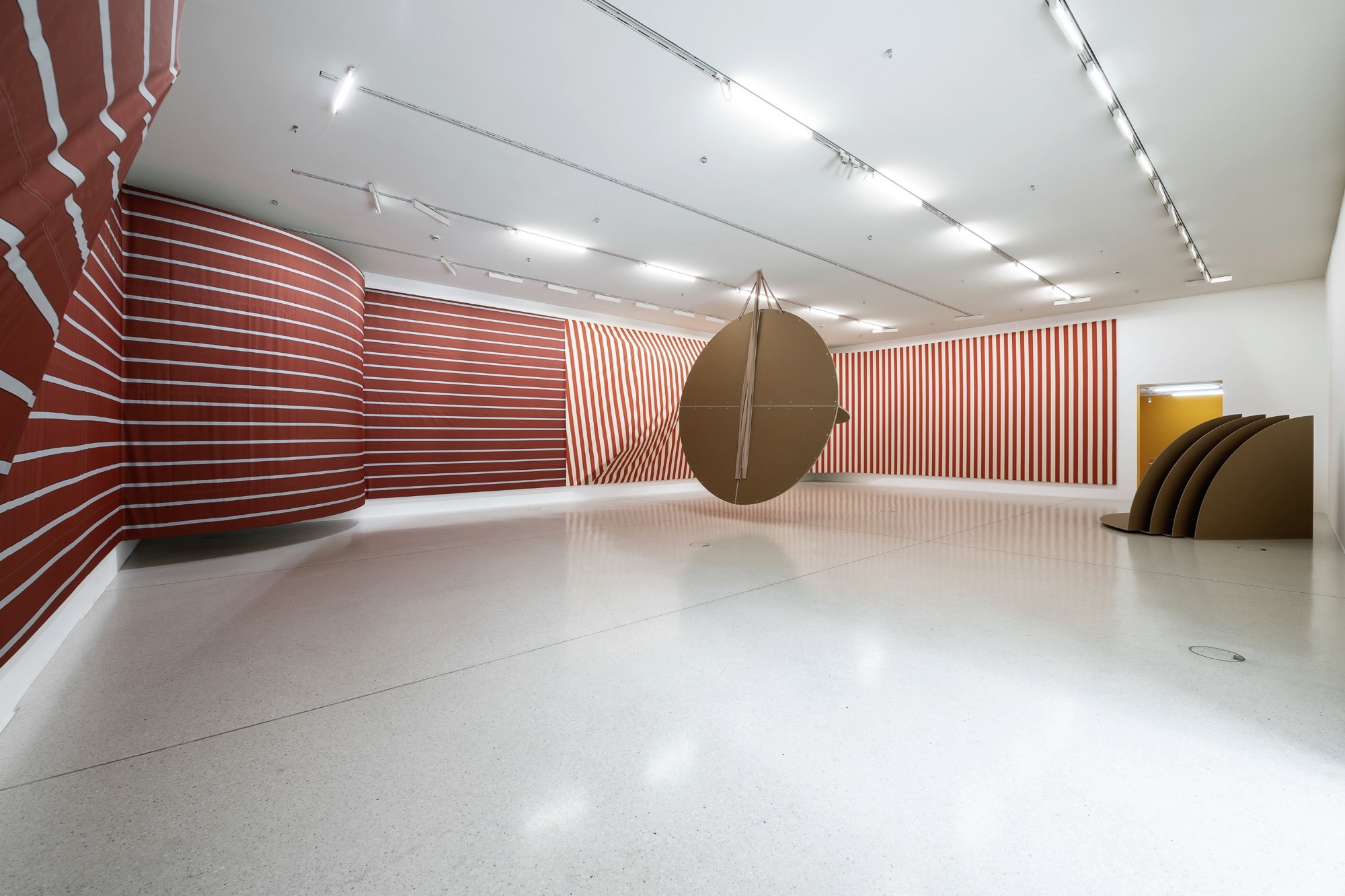 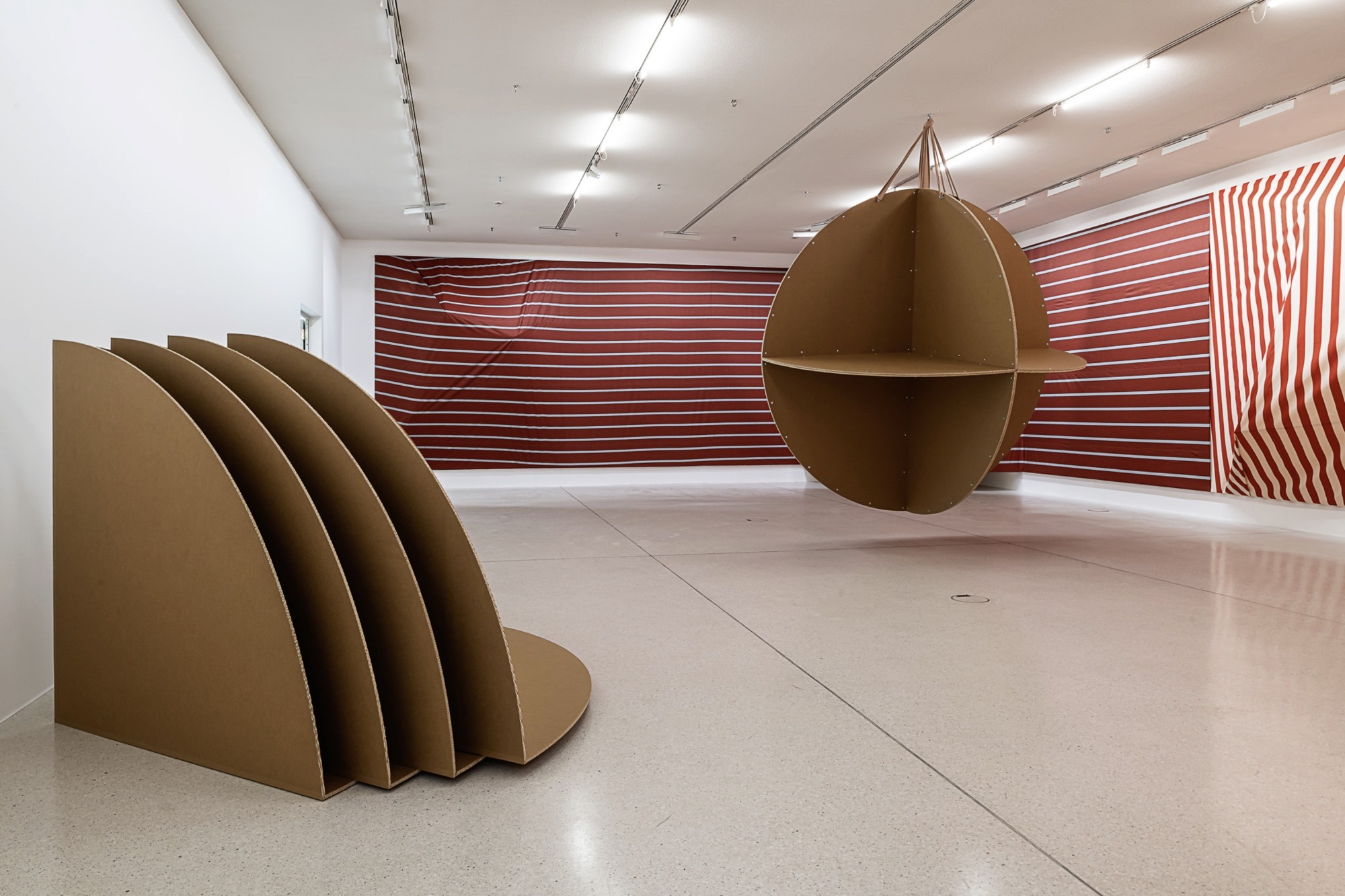 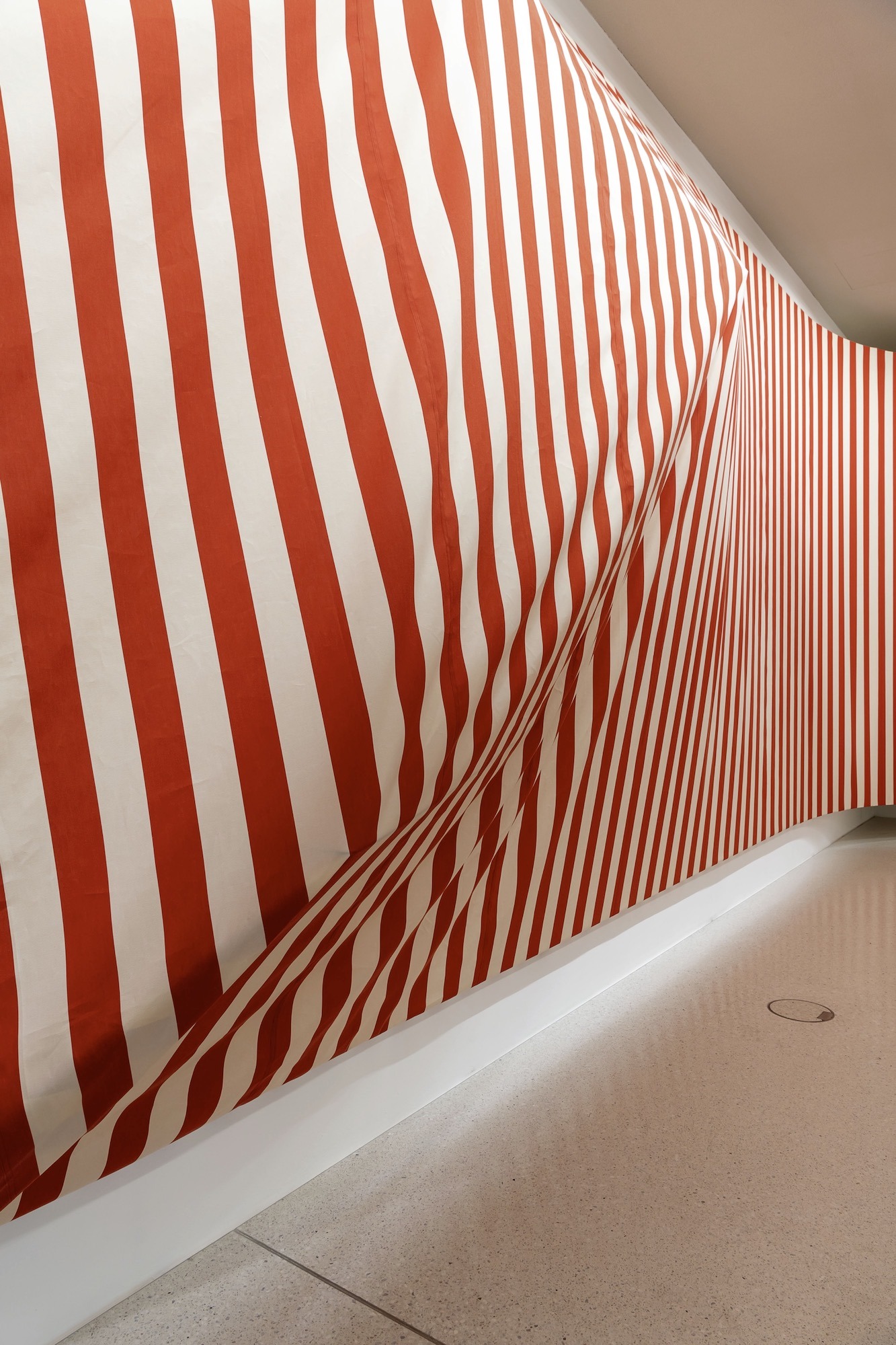 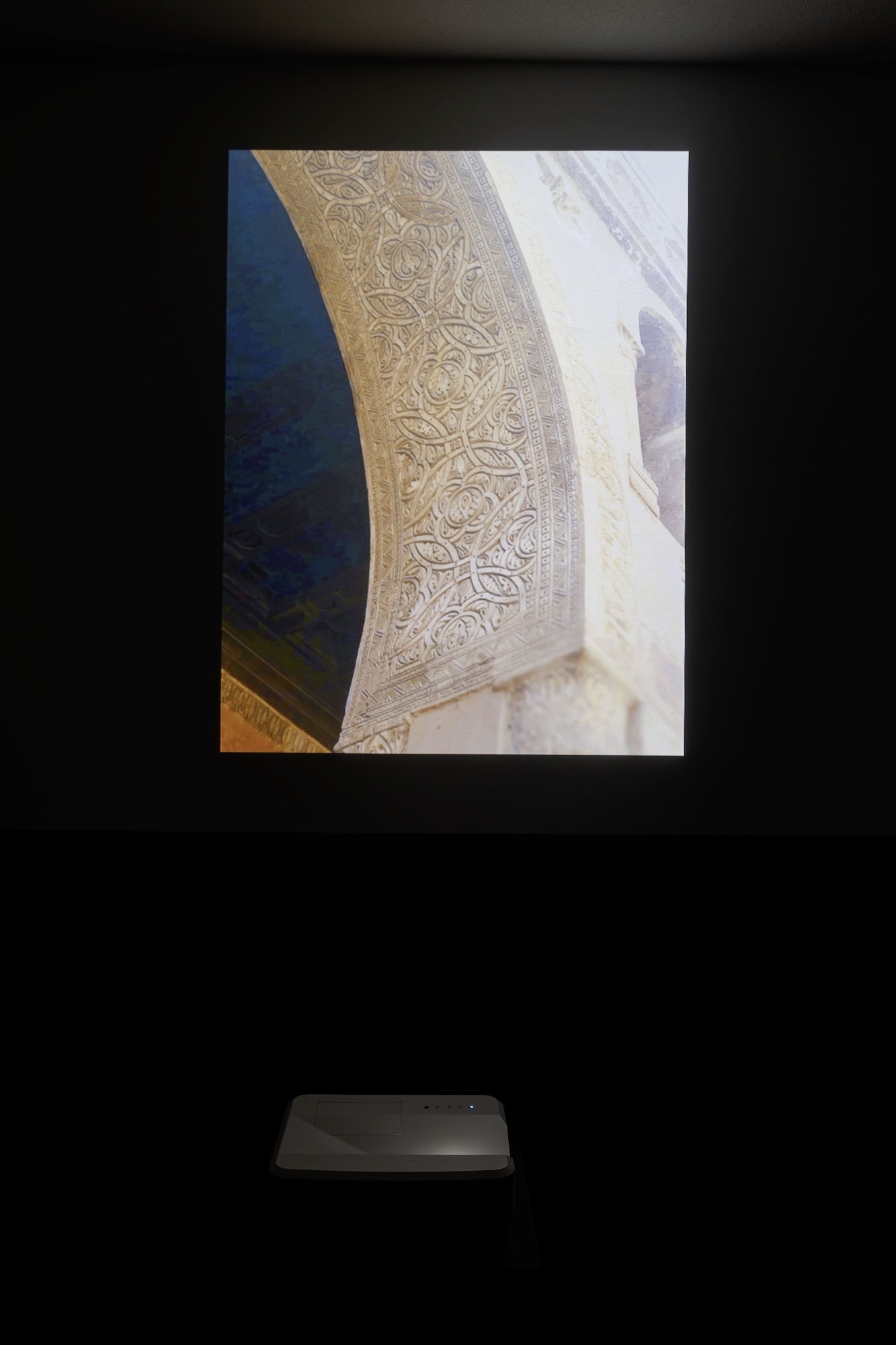 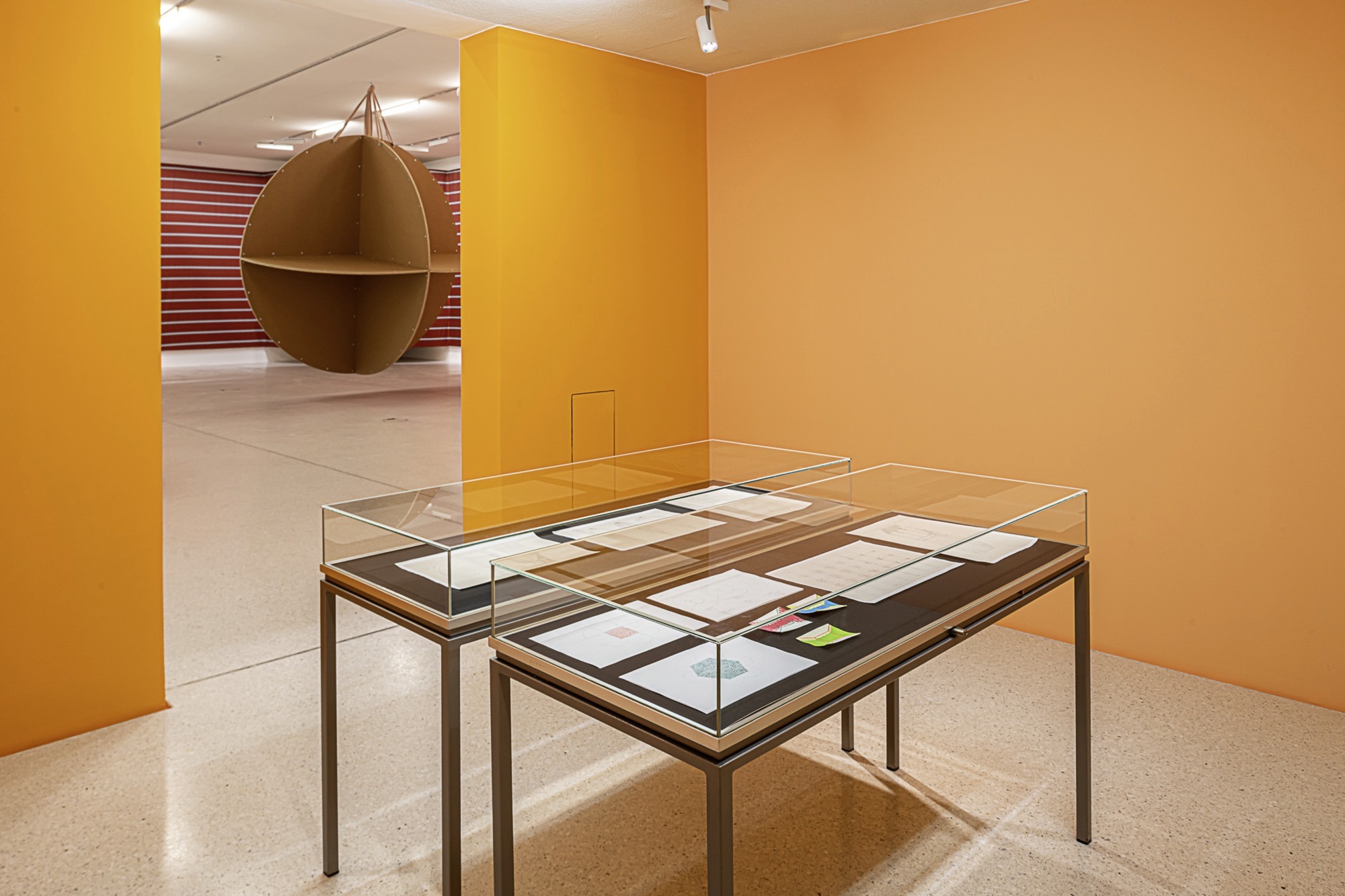 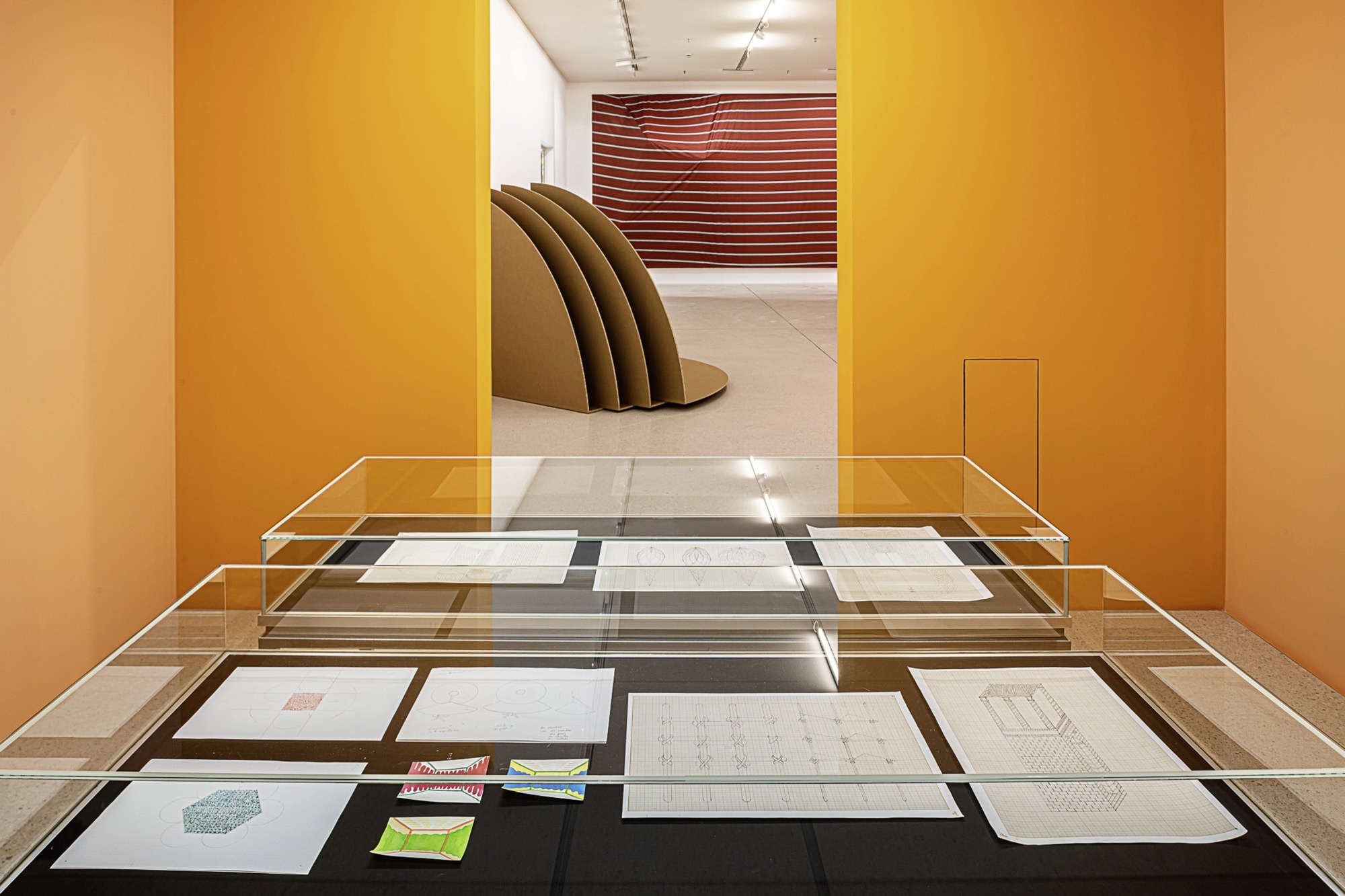 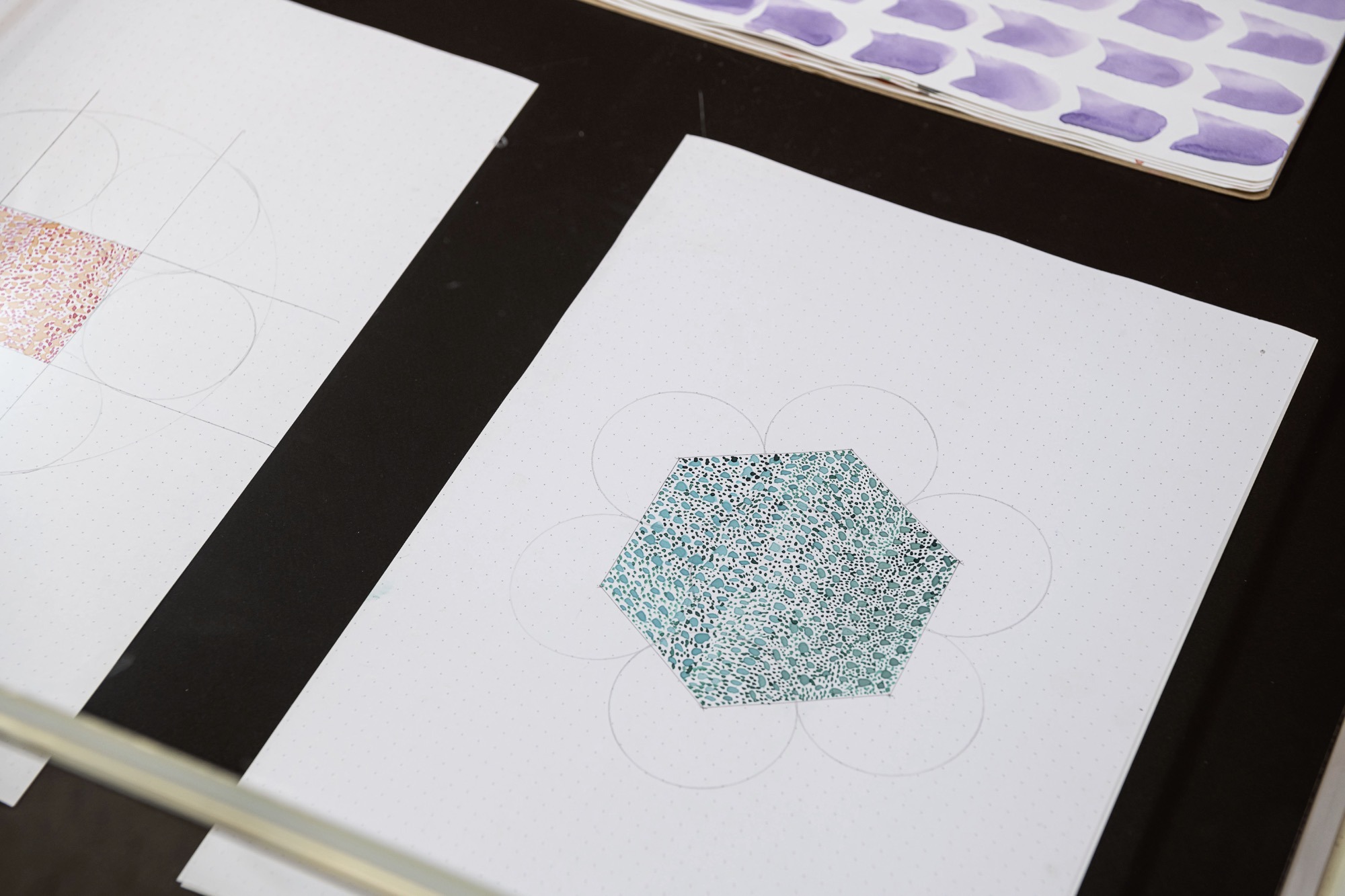 Sonia Kacem: Between the scenes. Installation view at Westfälischer Kunstverein, Münster, 2019. Photo: Thorsten Arendt
Tunisian-Swiss sculptor, Sonia Kacem's (b. 1985) practice is characterised by a sensitive examination of materials from which she develops process-oriented sculptural stagings that, despite their abstract form, invite a rich host of associations. In a large installation that takes up the entire exhibition space of the Westfälischer Kunstverein, she presents for the first time the outcome of her art research undertaken during a six-month working visit to Cairo at the beginning of this year. Based on her own North African roots and fusing Arabic cultural space with a vague sense of home and belonging, Kacem intended to devote herself to Islamic art in Cairo in order to develop an appreciation for its approach to non-figurative art predicated upon wholly different parameters from those at play in modernist abstract art in Western culture.

In order to document her impressions whilst she was there, Kacem used photographic snapshots and small segments of video footage, arranging her thoughts with the aid of numerous sketches. This research material can be viewed in the small exhibition space and serves as “visual notes”, as a kind of invitation to trace Kacem's findings and experience her impressions in order to approach the works in the exhibition in a visually intuitive and associative way. The sketches illustrate Kacem's interest in the transitions from abstraction to figuration, from surface to volume. They also detail the experiments that led to the installation in the main exhibition room: the formal development of the “half spheres” made of honeycomb cardboard was achieved by referring to the main features of Islamic patterns. Starting from a single point that expands into two-dimensionality in the form of a circle, any conceivable pattern can arise in the combination and modification of geometric shapes. Using the circle as her fundamental structural form, Sonia Kacem developed a system to harness its ability to unfold from identical individual parts into three-dimensionality.

Sonia Kacem's collection of photographs of Cairo contains many images of the colourful façades of various buildings with balconies and fabric hanging from them (one of which adorns the invitation card). For Kacem, this seemed like a rare expression of individuality and freedom in what is otherwise heavily regulated public space , which made her especially aware of herself as a woman. Consoles supporting balconies, pillars positioned in and at the corners of buildings crop up in her sketches and influenced the design of her installation at the Kunstverein. Here, too, the corners of the room are concealed and at the same time accentuated, again highlighting the quadrant as a recurring and versatile geometric motif. Sonia Kacem has been working with heavy (awning) fabrics on a regular basis since 2010. She is attracted to them because of their formal similarity to canvas, but also on account of their potential for volume, their classic colours, as well as the host of (mainly positive) connotations. Here too, this feeling is undermined or at least confused by the protuberances of the fabric that otherwise extends parallel to the wall. And, of course, by the sheer size and the unfamiliar proportions, which confront one as a viewer when inside the installation. Sonia Kacem has developed a substructure to this end, which enables her to determine in situ – both flexibly and spontaneously – the exact curves and three-dimensional extrusions of the material. Thus, despite its dimensions, “two curved angles and three walls” remains, above all, an artistic gesture that has ultimately been gigantically magnified. The same applies to “to stammer a pattern” in the foyer, where Kacem transfers her studies of form and pattern from her sketchbooks to the room. Here too, the meaning of the gesture becomes apparent as she repeats the same strokes and flourishes that she did in early calligraphy exercises when learning a new alphabet.
www.westfaelischer-kunstverein.de