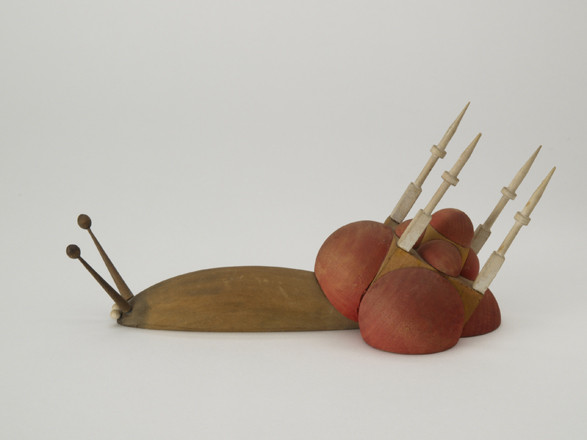 “In order to discover laws it is necessary to create them. The recognition of structures relies to a great extent on inventing and establishing them. Perception and creation go hand in hand.” (Goodman, 1978). This constructivist statement by the philosopher Nelson Goodman can be perceived as a programmatic point of reference for an unusual exhibition project. Taking the works of the Berlin artist Kerstin Stoll (*1969) as a starting point, the Westfälische Kunstverein has initiated a comprehensive group exhibition accompanied by a seminar. “We Make Versions“ presents a variety of different design models and “visionary” positions in art, science and related disciplines. In the context of the exhibition, Stoll takes on the role of curator together with Katja Schroeder, so that the artistic practice intentionally has an impact on the curatorial practice. In the style of Goodman, Stoll mediates in her works between natural scientific trains of thought and approaches predominant in artistic practices and discourses. Stoll takes great care to bring together aesthetic, natural scientific and philosophical systems of reference.

The more than 10 international artists represented in the exhibition also deal with the alternating relationship between knowledge gain and subjectivity: “Universal Research of Subjectivity”, a group project that reflects on constants in artistic work, is only one example for Edith Dekyndt’s (*1960) occupation with individual and global positions in society. Text, music, air, video, neon light—everyday materials—all serve as variables in her poetic installations, which explore the boundaries of art, science and reality. Hermann Finsterlin (1887-1973), whose designs form a strong contrast to the clear line found in Bauhaus design, is considered to be a visionary architect. No project by Finsterlin has ever been realized, however there are numerous fantastic-surreal looking drawings and playful models made of wood, which document Finsterlin’s visions of architecture. The works by Paul Laffoley (*1940) seem to operate in a context that goes far beyond the reality portrayed by natural science. Using meticulously drawn diagrams and illustrative material, he constructs complex models of knowledge and presents his theories on time travel and black holes as well as the fourth and fifth dimension.

The title “We Make Versions” refers to a parallel and equally-weighted approach to different “versions” or models of representation and narration, with view to their awareness-raising and productive abilities. With reference to Goodman’s book “Ways of Worldmaking”, the multifaceted possibilities for describing the world are each allowed their own respective truth claim. It is about both the examination of awareness-raising practices, apparatuses and methods of presentation as well as the subjective, productive and visionary potential of designs that attempt to perceive the complex relationships and phenomena in a descriptive way.

The approach to the production of knowledge in particular, which is not limited to just one discipline, will play an important role in the exhibition because it contains the potential to generate something new and meaningful. In this context the Westfälische Kunstverein is collaborating with the Academy of Fine Arts Münster. The art historian Dr. Anna Lammers will take up this theme in her seminar “Weltmodelle und Erkenntnis in der Kunst” (world models and awareness in art).

Sponsored by the Ministry for family, children, youth and sport of the state of North Rhine-Westfalia, the Münster City Ministry of Culture
as well as Pro Helvetia.
www.westfaelischer-kunstverein.de