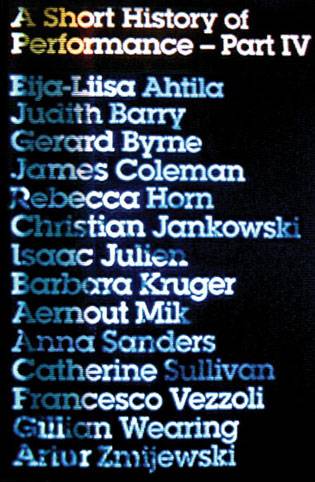 For two weeks artists including Liam Gillick, Isaac Julien, Barbara Kruger, Catherine Sullivan and Francesco Vezzoli speak live following screenings of their work. The season focuses on artists who, rather than using their own bodies for performance, direct, script and choreograph others in live action that plays for the camera. For one day only, each artist takes centre stage with screenings of their films followed by evening talks with the artists and leading cultural figures.

A Short History of Performance Part IV is the fourth instalment in the Whitechapel’s ongoing series dedicated to the history and legacy of performance art. This season focuses on artists who, rather than work with their own bodies, direct others in scripted, choreographed or staged situations. Their work also substitutes the live body with its mediated appearance on film.

Initially exploited for its documentary potential, film rapidly emerged as a space for performance, used by artists to explore theatrical, cinematic and televisual traditions. The artists brought together here adapt a variety of formats: from rehearsals, trailers or interviews to full blown narrative film. Some propose the projected image as a space of illusion and fantasy, of disjointed dreams or of fragmented memory. Others conjure up the more troubling spectre of surveillance or reality TV.

Through the medium of film, the body is explored as an expressive or communicative tool, animated by a set of ritualised actions that reflect on social relations, politics and desire. Variously interpreting acting as a form of masquerade, ventriloquism or repetition, they provokingly investigate the mediated nature of contemporary experience and identity.

Each work will be screened for one day only and is followed by an evening discussion. Daily screenings alternate between the Whitechapel and adjacent former library building, which the Gallery is acquiring to expand it's current facilities. Admission to daily screenings is free. Each day an evening talk follow the screenings.
www.whitechapel.org