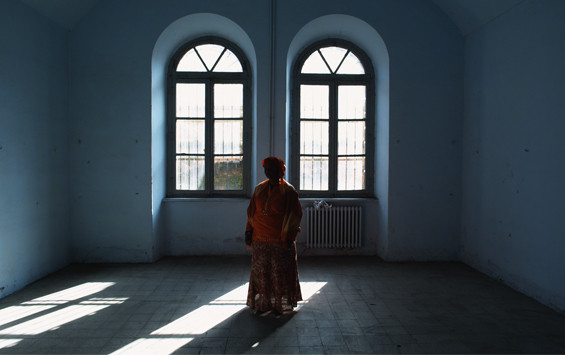 This season of artists’ films meditates on ideas of migration, displacement and journeying through individual stories informed by wider socio-economic and political conditions.

Alejandro Cesarco’s recent film Zeide Isaac (2009) features the artist’s grandfather performing a script written by the artist but based on his grandfather’s personal story as a Holocaust survivor, allowing for the gap between first-hand testimony and third generation re-telling to be explored.

STANZE (2010) by Gianluca and Massimiliano De Serio is based on the accounts of young political refugees from Somalia. Housed in a notorious former barracks in Turin, they re-visit throughstorytelling and re-enactment Italy’scolonial past in the Horn of Africa and itsongoing repercussions on their own efforts to fi nd a ‘home’.

In Gipsy Style (2009), Aleksandar Jestrovic Jamesdin uses a low-tech video camera to record an 80 day ‘vacation’ during which the artist swims his way through public fountains in major European cities, playing on ideas of tourism and travel, and in The Last Tango (2011) records the moments in a plane just before take-off.
www.whitechapel.org