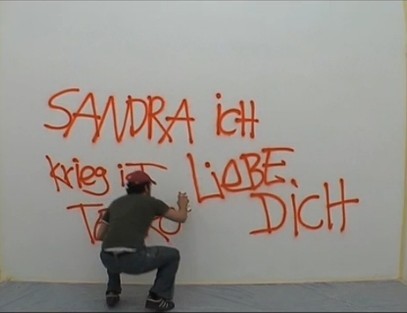 From role-play to communal activities and urban graffiti, this season presents artists’ films based on social and collaborative projects to coincide with The Spirit of Utopia which looks at the role art plays in offering alternative ways of configuring society.

Einat Amir’s collaborative practice encourages volunteers to respond to predetermined scenarios while Ana Gallardo, Marinella Senatore and Katarina Zdjelar each interrogate the power of people coming together in a public space to make music or engage in a shared activity. In Nasan Tur’s performance video, hundreds of graffiti slogans from the streets of Berlin are sprayed on top of each other to create a block of colour in which language is obliterated.
www.whitechapel.org