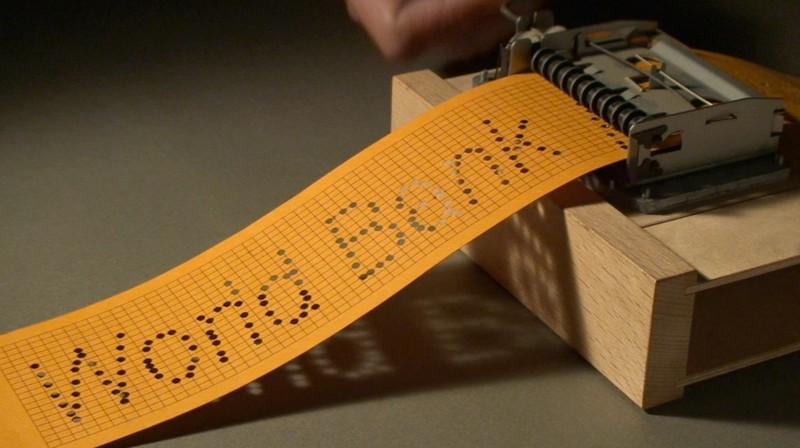 A showcase of artists’ film from around the world.
In Jorge Macchi’s (Argentina) film 12 short Songs (2009), newspaper headlines relating to the recent global financial crisis are turned into melodies. The text is imprinted on strips of paper and rolled through a music box, transforming the disastrous headlines into calming sounds associated with serenity and sleep.

Untitled (David) (2012) by Nicole Miller (USA) observes a man the artist encountered by chance on the street. He recounts the events leading to the amputation of his left arm whilst his right limb is reflected in a mirror, a rehabilitation technique which helps patients deal with the painful symptoms of a phantom limb.

Artist Angela Su’s (China) film The Hartford Girl and Other Stories (2010) looks at issues related to the phenomenon of self-mutilation in contemporary society, from tattooing to body modification and self-harm.

In Oded Hirsch’s (Israel) absurdist film The Tractor (2014) farmers are shown hurriedly at work in a desolate field. At the request of the artist, the group uncovers a tractor buried deep in the soil as if it were an archaeological relic from a glorious past.

Pitter-Patter (2009) by artist collective Provmyza (Russia) focuses on a young woman on her sickbed and the crowd of people who have come to bid her farewell as her life slips away. The work is an attempt to recreate a photograph by 19th century English photographer Henry Peach Robinson using performance and music.