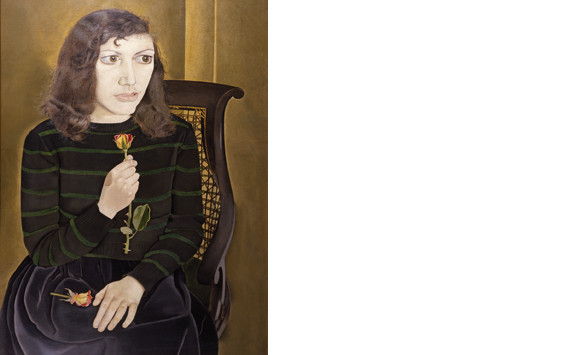 Girl with Roses, 1947-48, is an iconic early painting by Lucian Freud, a psychologically charged portrait of the artist’s first wife Kitty. Her intense expression communicates a startling immediacy, amplified by the almost palpable lines of her sweater and the velvety folds of her skirt.

Recognised as a masterpiece of Freud’s early career, the painting is one among over 8000 works in the British Council Collection, one of the most impressive public collections of 20th century British art in the world. It is presented here among other key works drawn from the Collection, in the first of a series of exhibitions oganised over the next year, on the occasion of the British Council’s 75th anniversary.

Focusing on Great Early Buys the exhibition also includes key works by Paul Nash and Ben Nicholson; rare early carvings by Henry Moore; Cataract 3, one of Bridget Riley’s first major paintings in colour; and later works by a younger generation of artists such as Peter Doig, Sarah Lucas and Chris Ofili. Selected by the artist Michael Craig-Martin, the display focuses on one of the Collection’s great strengths – buying from artists at early stages in their careers.

Following on throughout 2009, three further guest curators will present displays drawn from the Collection. A fifth display in Spring 2010 will result from an international competition open to curators worldwide.