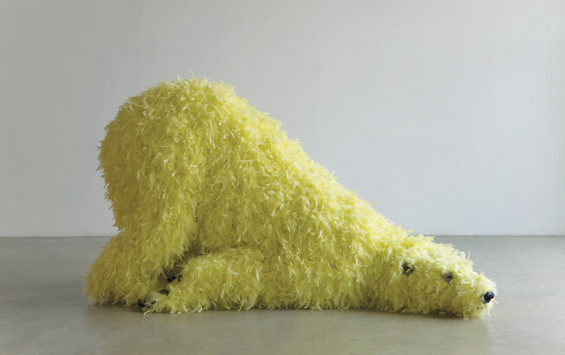 COLLECTION SANDRETTO RE REBAUDENGO
Have you seen me before?
18 June - 8 September 2013

A bear with soft fur made of fluffy chicken down forms the central work in the final display from Italian-based Collection Sandretto Re Rebaudengo. Have you seen me before? (2008) by Paola Pivi plays on our expectations and feelings, erasing the boundary between reality and fiction.

Katharina Fritsch’s large still-life sculpture Table with Cheese (1981) also has an uncanny ambiguity. The oversized cheese can be seen as either appealing or revolting. Its simple form is that of a minimalist sculpture but at the same time, it is completely realistic.

The negotiation between perception and imagination continues throughout; from Ceal Floyer’s projected image of a nail on a wall, Projection (1997), to the blinking beacons of Angela Bulloch’s Yellow Corner (1993), which displaces lights from a pedestrian crossing in the Gallery. Other works question their own physical reality through deceptive visual effects.

Up close, US artist Tauba Auerbach’s, Crumple VII (2009) is a mesmerising surface of undulating black dots, however from afar, its composition suggests the three-dimensional shape of a crumpled sheet of paper, while Paul Pfeiffer exploits the editing function in film, showing a compere repeatedly appearing and disappearing behind the same curtain.

One of the most important private collections in Europe, the Collection Sandretto Re Rebaudengo includes work from leading international artists. The presentation is part of the Whitechapel Gallery’s ongoing programme showing rarely-seen public and private collections.
www.whitechapel.org