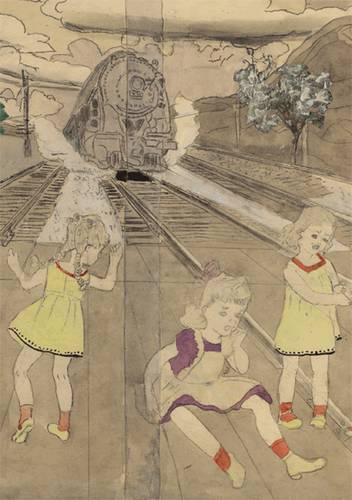 Since the early 20th Century, the terms Art Brut or Outsider Art have encouraged a distinction between mainstream artists and individuals producing art from the ‘fringes of society’. Inner Worlds Outside is a landmark exhibition bringing Insider and Outsider artists together as two sides of the story of modern art.

Outsider Artists have included psychiatric patients, criminal offenders, self-taught visionaries, mediums and other ‘eccentric’ individuals. Interest in Outsider Art has grown with the rise of psychiatry. Artists like Paul Klee, Pablo Picasso, the Expressionists and Surrealists explored the psyche in search of autonomous creativity or childlike innocence, and turned to ‘outsiders’ for inspiration. However the way Outsider Art has been defined by biographical and psychological factors is now outmoded.

Inner Worlds Outside now explodes the myths surrounding Outsiders, showing the parallels between Insider and Outsider Art, and the impact of unknown Outsiders on some of the greatest artists of the 20th Century. The exhibition presents works by modern masters including Jean Dubuffet, James Ensor, Philip Guston, Wassily Kandinsky, Paul Klee, Joan Miró and Emil Nolde alongside those of Outsiders such as Henry Darger, Madge Gill, Michael the Cartographer and Adolf Wölfli.

Themes include Faces and Masks which reveals the magical powers invested in representations of faces, as in the obsessive, intricate drawings by the clairvoyant, Madge Gill. While Imaginary Landscapes shows epic narratives by Henry Darger, and The Allure of Language explores written language as a coded structure and features the elaborate, imaginary maps of Adolf Wölfli.

Curated by Jon Thompson with Monika Kinley, Inner Worlds Outside is a collaboration with Fundacion La Caixa, Madrid & the Irish Museum of Modern Art, Dublin.
www.whitechapel.org