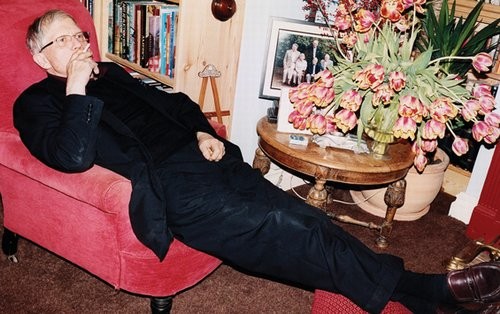 5 April-21 June 2009
Foyer and throughout the building

As the Whitechapel Gallery closed for expansion, five artists making lens-based work were offered a challenge. Could they capture the transformation of two historic buildings, their locale and their communities?
Andrew Grassie depicts the Fine Art and Childrens sections of the former library as their books are removed. Transposing the photographic into the painterly, he evokes the architectural past and then juxtaposes it with the new life of these interiors as galleries.
Rosalind Nashashibi’s installation is inspired by a 16mm film found in a skip in east London; and a show of kilims at the Whitechapel Gallery in 1977. Through found images she shows how pattern is encoded with symbolic narratives; and how it offers unexpected parallels across time and culture.
Nick Relph and Oliver Payne’s film installation looks at the aspirations of regeneration projects. Filmed in an anonymous abandoned library, the work uses digital manipulation to critique processes of gentrification.
Juergen Teller’s portraits feature figures who live locally and have a relationship with the Gallery and its past. Like Paris in the 1900s, or New York in the 1960s, east London in the early 21st century is a mecca for artists and a crucible for culture. Teller photographs just some of the individuals who play a part in this defining moment.
www.whitechapel.org