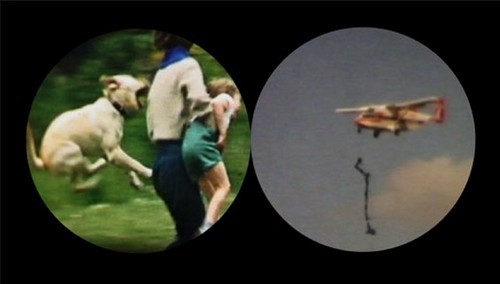 The work’s title is an abbreviation of ‘found family footage’, though it can also be read as a musical instruction. Consisting of images drawn from a collection of home movies shot in the 1950s and 1960s, fff draws on the archives of two families – the Fryers and the Howards – whose fathers worked for the Farnborough RAF. The footage is an eclectic mix of domestic scenes and the pioneering research into flight conducted by men of both families. Made up of quintessentially English vignettes, the work is fuelled by nostalgia for a seemingly lost age. However, Ataman’s de-construction reveals a more complex narrative. An original score composed independently – or ‘blind’ – by Michael Nyman, accompanies the short films. Ataman edited visual sequences according to Nyman’s music, effectively treating both sound and image as ready-mades.

Ataman’s work primarily consists of cinematic portraits of remarkable, yet often marginalised, individuals. By limiting his authorship in fff to editing and merging two elements authored by others, he constructs a new perspective on British culture from the outside in.
www.whitechapel.org