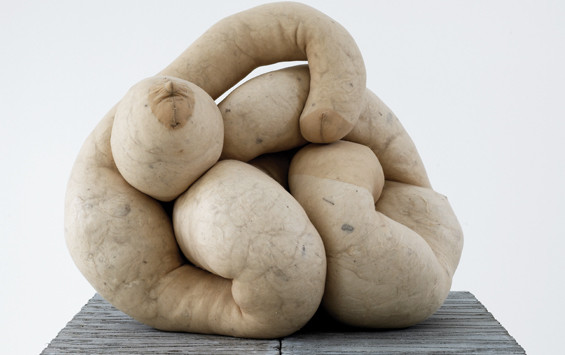 Stained mattresses, sofas and chairs act as plinths for ‘bodies’ sometimes situated against the surreal domesticity of Lucas’s wallpapers. Her figures are all headless. There is only one face, that of the artist herself, omnipresent through a sequence of self portraits.

Lucas’s oeuvre has been quintessentially urban but this show also features her recent Penetralia, flying penises combined with wood and flint. Titled ‘Whand’ and ‘Druid’ they suggest a magical, holistic relation to nature.

This exhibition takes us from Lucas’s 1990s’ foray into the salacious perversities of British tabloid journalism to the London premiere of her sinuous, light reflecting bronzes: limbs, breasts and phalli intertwine to transform the abject into a dazzling celebration of polymorphous sexuality.
www.whitechapel.org