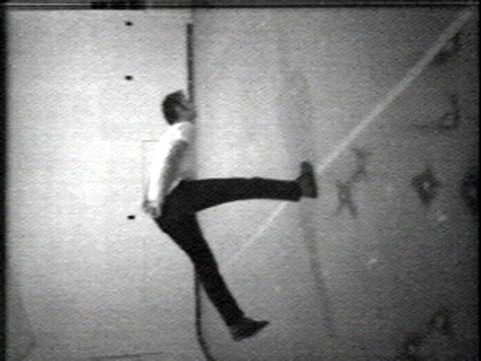 ‘If I was an artist and I was in the studio, then whatever I was doing in the studio must be art.’
Bruce Nauman in conversation with Ian Wallace and Russell Keziere, Vanguard, Vol. 8 #1, 1979

This exhibition focuses on the experimental and ground-breaking films that Bruce Nauman made between 1967 and 1969 where the artist’s own body is used as a template; an expressive instrument in motion and gesture to relentlessly question the human condition.

After graduating from UC Davis in 1966, Nauman set up a studio in a former grocery shop in the Mission district of San Francisco and then in a sublet from his university tutor in Mill Valley. These two locations provided the setting for a series of performed actions which he captured in real time, on a fixed camera, over the 10 minute duration of a 16mm film reel. The works continued Nauman’s interest in a philosophical and honest approach to art, where the camera becomes a sketch book, instantly recording an activity and the on-going process of it.

Each film is titled in accordance with the activity taking place such as Bouncing two balls between the floor and ceiling with changing rhythms or Playing a note on the Violin while I walk around the studio. While the influence of music, avant-garde dance and literature is apparent in these works, they appear ambiguous and open-ended despite their reliance on a precise and structured procedure. This is particularly evident in the work entitled Walking in an Exaggerated Manner Around the Perimeter of a Square. In this film, Nauman creates his own syntax of bodily movement by carefully stepping around the edges of a double perimeter from heel to toe and swinging his hips from side to side, resembling the Walk With Contraposto that he filmed later in 1968.

In the late 1960s, Nauman moved to New York and obtained a portable video camera from his dealer, Leo Castelli. A pioneering piece of technical equipment at the time but one that allowed Nauman to record for longer (60 minutes) and to immediately review what he had filmed. The increased duration of the film meant that Nauman could test his endurance to exhaustion point, particularly in Stamping in the Studio where the artist is noticeably fatigued towards the end. In Pacing Upside Down or Revolving Upside Down Nauman disorientates the viewer by inverting the image and either pacing or performing a series of balletic moves that seem, once inverted, to counteract gravity. By tipping the camera on its side, Nauman appears to be walking up the wall in Slow Angle Walk (Beckett Walk) in homage to the misadventures of Samuel Beckett’s characters Molloy and Watt. Many of these films evolved from earlier performances, for instance in Wall-Floor Positions Nauman recreated a sequence of seven postures in four varying stances tightly framed against the floor and wall of the studio. As with all of Nauman’s films, these laborious and repetitive actions are heightened by their sound which audibly continues even when the artist stops the action and walks off-screen.

Bruce Nauman was born in 1941 in Fort Wayne, Indiana and lives and works in New Mexico. He has exhibited widely including his first museum survey exhibition co-organized by The Los Angeles County Museum of Art and the Whitney Museum of American Art: ‘Bruce Nauman: Works from 1965 – 1972’ (1973). The Walker Art Center, Minneapolis organized a touring retrospective exhibition from 1993– 1995. The Whitechapel Gallery, London was the final venue of a

touring exhibition on ‘Bruce Nauman’ (1987) and in 1998 ‘Bruce Nauman: Image /Text 1966–96’ travelled to the Hayward Gallery, London. Nauman’s installation ‘Raw Materials’ was the fifth commission as part of the Unilever Series at the Tate Modern Turbine Hall, London (2004). He represented the United States at the Venice Biennale and his exhibition ‘Bruce Nauman: Topological Gardens’ was awarded the Golden Lion for The Best National Participation (2009). An exhibition of Bruce Nauman’s sound installation ‘Days’ will take place at the Institute of Contemporary Arts, London from 19 June to 16 September 2012.
www.whitecube.com