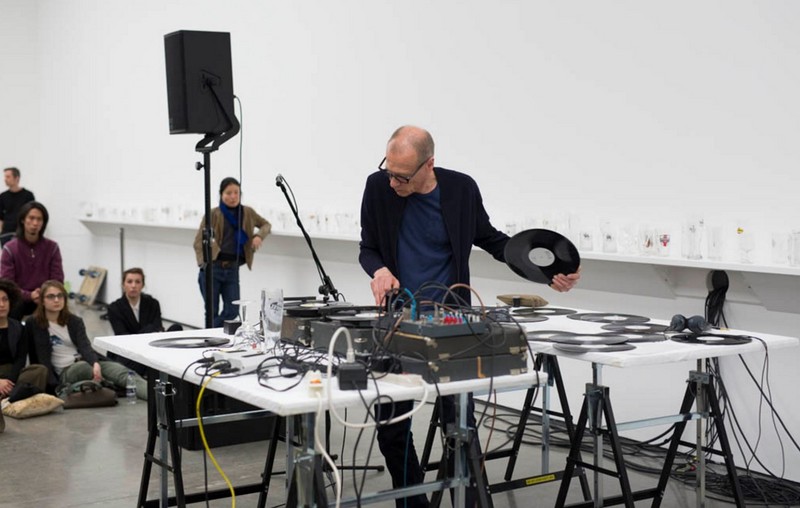 White Cube presented a major solo exhibition by Christian Marclay, including a range of new work and a lively programme of performances. Continuing Marclay’s long-standing interest in the relationship between image and sound, the exhibition was comprised of a series of works on canvas and paper that feature onomatopoeia taken from comic books. Unlike earlier instances of sound mimesis in his work, these focus solely on the wet sounds suggestive of the action of painting. Combining cartoon-strip imagery and the dripping, pouring and splashing noises associated with gestural abstraction, the works ironically bridge a gap between art movements as distinct as Abstract Expressionism and Pop Art. This is also reflected in the method in which they have been made; a combination of painting overlaid with screen printing.

A further set of onomatopoeia is put in motion for the first time in a large-scale video installation Surround Sounds (2014-15) which projects across four walls. To make the work, the artist collated a lexicon of the sound effects made by characters in superhero stories. The scanned cut-outs were then animated using the software programme After Effects in a dynamic choreography that suggests the acoustic properties of each word. ‘Boom’, for example, is no longer static on the page, but bursts into life in a sequence of colourful explosions, while ‘Whooosh!’ and ‘Zoooom!’ travel at high speed around the walls. The work fuses the aural with the visual, and immerses the viewer in a silent musical composition.

The aqueous motif introduced with the paintings ran throughout the exhibition, surfacing in a number of new works that allude to everyday life. In a new video installation entitled Pub Crawl (2014), the artist coaxes sound from the empty glasses, bottles and cans that he finds abandoned on the streets of East London, during early morning weekend walks. In a series of projections that ran the length of the gallery’s corridor, these discarded vessels are hit, rolled and crushed, forming a lively sound track that echoes throughout the space.

A programme of weekend performances led by London Sinfonietta are taking over a large section of the gallery and ran for the duration of the exhibition. London Sinfonietta and Marclay worked together with some of the world’s most renowned contemporary composers and improvisers to stage performances, including new compositions and live improvisation sessions. The exhibition also featured The Vinyl Factory Press, a unique hydraulic vinyl pressing machine created by The Vinyl Factory, and screen printing equipment operated by the London printmakers Coriander Studio. Audiences were able to witness on site the unique process of producing vinyl records, from the initial recording of the concerts to cutting and pressing the records and printing the sleeves.

The records that were pressed each week by the Vinyl Factory will be sold on a first come first served basis. The price is £25 each and they are available from our bookshop (in person) and online via the Vinyl Factory website: www.thevinylfactory.com

Re-enactments of fluxus scores by artists such as George Brecht, George Maciunas, Yoko Ono, and Mieko Shiomi, also took place during the exhibition, performed by students at Royal College of Art, London and London College of Communication. Performances took place intermittently on weekdays between 12pm and 4pm.

Special thanks in regards to the re-enactments of fluxus to Nigel Rolfe, Professor of Fine Art (Performance) at Royal College of Art, London, and to Cathy Lane, Professor of Sound Arts and Co-Director, CRiSAP, Creative Research into Sound Arts Practice, London College of Communication.
www.whitecube.com