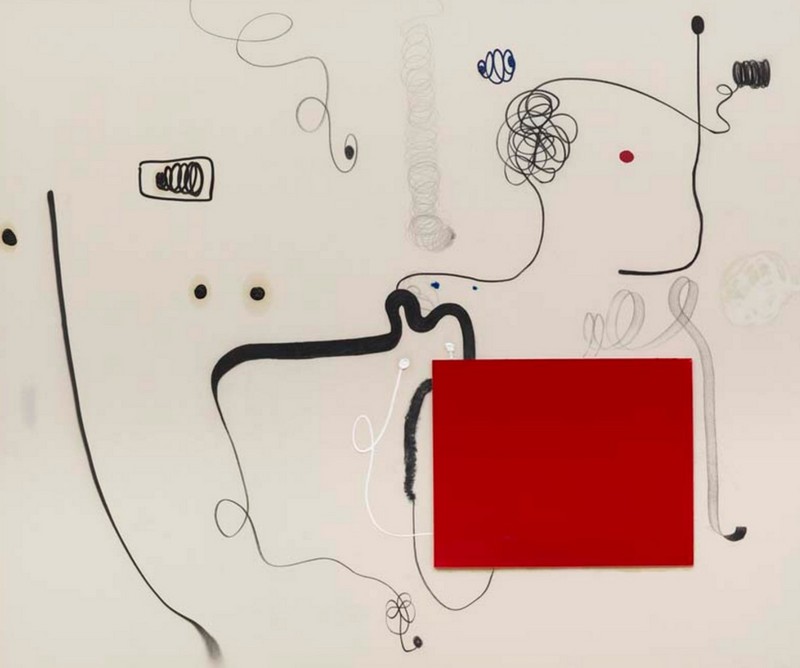 White Cube presented an exhibition of new paintings by Christian Rosa at Mason’s Yard, his first in the UK.

Christian Rosa’s sparse and eloquent abstract paintings function like automatic writing, built up from individual elements on large expanses of raw, untreated canvas. The paintings in this exhibition continue his process of discovery, visible in direct and deft compositions that contain both the building blocks for pictorial narrative as well as the methods for their own deconstruction.

In these new works, minimal mark-making in oil, charcoal, pencil, resin and oil stick and a reduction of visible brushwork create works that are improvisational in appearance, holding their carefully balanced elements in an arresting visual tension. Rosa harnesses the inherent qualities of his materials, using their textural appeal to create layers and depth on the surface and to encourage emotive and subjective responses in the viewer.

Appearing on first glance to pursue the ideals and procedures of high-Modernism and yet dispensing with its rules, Rosa adopts an approach to painting that is both ineffable and highly personal. In his work, new modes of communication arise between the isolated, singular elements on the canvas surface, and marks suggest the preformed beginnings of something: lines, squares and childlike squiggles act like mnemonic symbols of a larger conversation. Punctuated by areas of primary colour, Rosa’s images could suggest recognisable things such as roads, buildings or even faces; whereby marks innocuously create an emergent and uncomfortable figuration through their immediate juxtaposition.

Rosa’s painting is open-ended, guided, as Gabriela Salgado has noted, by ‘chance and an instinctive trust of the energy contained in physical motion and failure’. Created as points of departure for a new emotive, visual experience, his pictures suggest planes of energy from which different narratives and possibilities can spring off.
www.whitecube.com