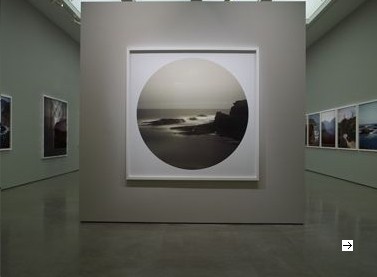 White Cube Hoxton Square is pleased to present a new exhibition of photographs by Darren Almond.

Almond’s work often takes him to remote parts of the globe, following conceptual threads that encompass geography, politics, history and his own biography. This exhibition will include two distinct bodies of work: Fullmoon photographs that incorporate new images and key earlier images from around the British Isles and new large-scale photographs taken in Tibet.

Almond has been making his Fullmoon photographs since 1998, when a chance encounter led him to start practicing night photography, using moonlight and an extremely long exposure. The result is an ongoing series of landscape photographs that are bathed in an eerie brightness, seemingly transforming night into day, an effect that Brian Dillon describes in his catalogue essay as “a kind of fog of knowing and unknowing, revealing and concealing”. In Almond’s photographs, waterfalls and gushing lakes become pools of static steam (Fullmoon@High Force in Shadow and Fullmoon@Tees River) and a pounding sea is calmed into a thick, solid fog (Fullmoon@Malin Head and Fullmoon@Point). In others, such as Fullmoon@Gairloch or Fullmoon@Wester Ross, Almond presents us with the mossy, ferny landscapes of bygone British folklore. Always unpopulated, his landscapes suggest the possibility of another existence, a dead-of-night world without the seething masses of humanity.

With the title of the exhibition, ‘Moons of the Iapetus Ocean’, Almond highlights his interest in the sea that existed between England and Scotland between 400-600 million years ago. Examining this landscape, as well as other fringe locations, such as the remote coasts of Ireland and southern England, he reminds us of the temporality of historical geography as well as our own individual isolation and insignificance within the larger geological scheme of things.

In the upstairs gallery, Almond will present three large-scale photographs from his new series entitled ‘Infinite Betweens’. These works were taken in Tibet, where traditional prayer flags are hung in trails across the mountain ridges as a way to make offerings of thanks and prayers. The flags accumulate and become scattered over one of the highest and most exposed landscapes on earth. Almond’s photographs depict them as gorgeous, multicoloured abstract compositions. As with the Fullmoon photographs, Almond made use of moonlight and long exposures to shoot ‘Infinite Betweens’, preserving the movement of the flags and confronting the viewer with impossible perspectives, different focal points and a feeling of being within the picture. These photographs developed out of Almond’s recent film In the Between (2006), a 3-channel HD video with audio that examines the new high speed train that connects China with Tibet, a reinforcement of Chinese dominance. The title of these works refers to the Buddhist vision of relativity of all beings and things, the idea that we always occupy an ‘in-between’ state that is never ending and infinite.
www.whitecube.com