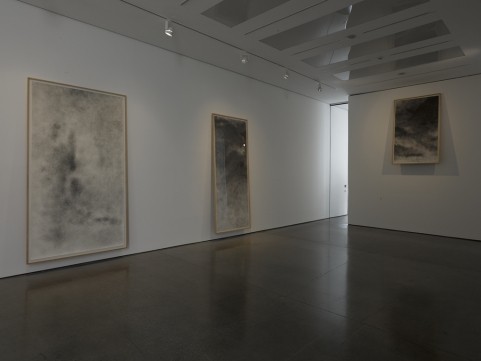 White Cube is pleased to present an exhibition by American artist David Hammons. This survey of new and recent works is the artist’s first major gallery show in London.

Over the course of his career, Hammons has carved out a singular position. He first came to prominence in the 1970s – when issues of politics, race and sexuality were coming to the fore in the art world – with a series of prints made using his own body. He went on to make performances (selling snowballs on the street), sculptures (rock heads covered with hair clippings from Harlem barbershops), and installations (a darkened gallery where visitors were given tiny flashlights). His work draws on an eclectic range of tactics and techniques and reveals affinities and influences as diverse as Marcel Duchamp, jazz and improvisation, Bruce Nauman, the Watts Tower, Ed Kienholz, and street culture. Yet he discreetly injects sociological content into the tropes of conceptual art, offering mordant commentary on the position of African-Americans within the dominant culture – as well as his own status as a maverick black artist within an elite art system. His strategies for engaging with this system, as well as his incursions into the market, have rendered him a legendary figure whose impact is all the greater for his apparent elusiveness. Hammons is a provocateur par excellence, the fox in the henhouse of conceptual art.

The ground floor gallery showcases four basketball drawings. Hammons produced these abstract compositions by repeatedly bouncing a basketball against a piece of white paper. Formally, these drawings, like the body prints, are the by-product of a physical movement, with the throwing of the ball hearkening back to the procedures of American gestural abstraction. The use of humble materials, the dirt and dust from the street which the basketball stamps into the paper, also acknowledges the influence of Arte Povera. The grime of the street is implicitly opposed to the sterility and fussiness of institutional spaces. The artist has placed nondescript suitcases behind several of these works, in some instances using them to push the drawing out from the wall. The addition of a concealed object not only invests these flat works with a sculptural dimension but also intensifies the sardonic note of social commentary. For many black people in America, basketball was and is a way out of the ghetto, of ‘making it’ – but the title of two of the drawings, Traveling, invokes the foul of carrying the ball too far, and with it implies that such advances may be temporary or illusory.

The larger lower ground floor gallery features four of Hammons’s latest paintings. In this series, the artist has draped a tarp or plastic sheet scavenged from the street over a canvas painted in a lush Abstract Expressionist style. The tension between distressed material and the abstract forms of the partially concealed surface beneath yields a mysterious formal beauty. Here, high abstraction is crossed with street culture, and the purity of the picture plane is interrupted by the lo-fi cover. The use of the cover also endows these two-dimensional works with a strong physical presence, blurring the line between painting and sculpture. These hybrid compositions stand in ambiguous, and perhaps critical, dialogue with European Modernism. At the same time, by turning on the polarities of visibility and invisibility, perception and omission, insider and outsider, they can be read as veiled commentaries on racial politics, art history, and misrecognition.

Also on exhibition is The New Black (2014), a work from Hammons’s most recent sculpture series: an African tribal mask that the artist has painted over in orange. While the sculpture may be read as a riff on the faux primitivism of Picasso, its title is a piece of Duchampian word play that invokes race, pop culture, and more particularly fashion – the fashions of the art world, its intermittent flirtations with black artists and black subject matter, as well as street fashion.

As a coda to the exhibition, one of Hammons’s fur coat sculptures is exhibited in the smaller downstairs gallery. The fur coat, a symbol of privilege, wealth, and perhaps the collector, has been streaked with paint, as if vandalised or graffitied. The irony, of course, is that here it is the mark of the artist’s hand which confers value. The sculpture reflects a shift in the artist’s work towards satirising the vanities and pretensions of an art establishment that, even in 2014, remains a whiter shade of pale.