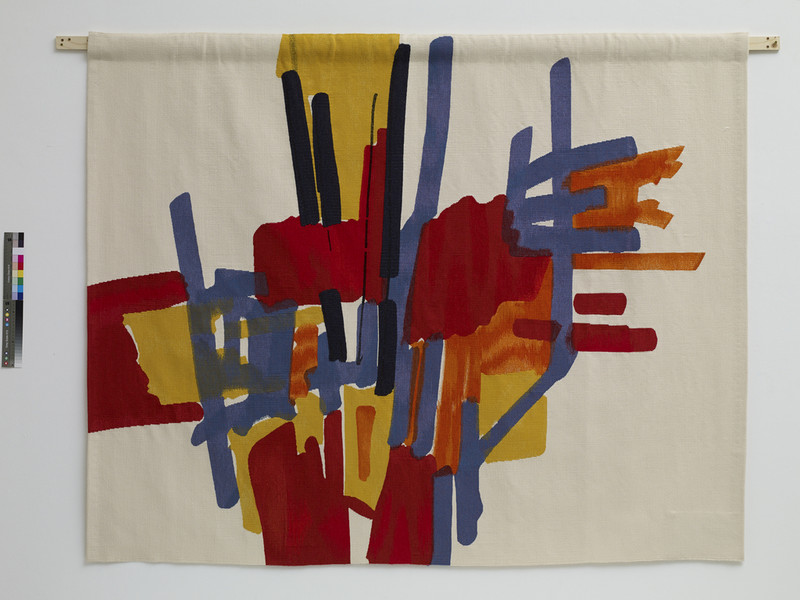 White Cube Bermondsey is pleased to present an exhibition of new paintings by Lebanese-born artist Etel Adnan. As a poet and novelist, Adnan is one of the leading voices in contemporary Arab American literature, alongside which, since the 1960s, she has painted, drawn and made accordion-like, fold-out illustrated books, known as leporellos. These practices, both verbal and visual, are underpinned by an intense engagement with the world.

For this exhibition, Adnan has produced a series of 26 abstract landscape paintings – bold, colourful and expressive works that are intimate in scale. Painted from memory, landscapes (all untitled) are distilled into their definitive features: mountain, horizon and sky are represented as square masses or triangular, pyramidal shapes in thick, bright colours. A floating circular shape rendered in yellow, orange or green suggests a sun; bands of pure colour suggest sea or sand. Adnan works on a table, using a palette knife to apply oil paint onto the canvas – often directly from the tube – in firm swipes across the picture’s surface. These elemental colour field compositions exude an intense energy, recalling the block-like slabs of colour in the late French landscapes of Russian painter Nicolas de Staël.

Adnan says, ‘Images are not still. They are moving things. They come, they go, they disappear, they approach, they recede, and they are not even visual – ultimately they are pure feeling.’ Her work relates to places that have a deep resonance for Adnan: the mountains near her home in Sausalito, California, where the artist has lived for some 50 years, or the Mediterranean Sea of her childhood home in Beirut. During her time in Sausalito, Adnan has made thousands of drawings of Mount Tamalpais, an immutable reference point, visible from the windows of her home; her 1986 book, Journey to Mount Tamalpais is a meditation on the relationship between nature and art. For her, ‘vision is multidimensional and simultaneous’, and these new paintings are the meeting place for many images, coalesced into one sensorial experience.

Etel Adnan was born in 1925 in Beirut and lives and works in Paris. She studied philosophy at the Sorbonne, Paris, University of California, Berkeley and Harvard. From 1958–72, she taught philosophy at Dominican University of California, San Rafael, going on to work as a cultural editor for two daily newspapers in Beirut between 1972–76. Her novel about the Lebanese Civil War, Sitt Marie-Rose, was first published in 1977, winning the France-Pays Arabes Award, and has since been published in more than 10 languages. Her work was recently presented in the solo exhibition ‘Etel Adnan in All Her Dimensions’ at Mathaf: Arab Museum of Modern Art, Doha, Qatar (2014) and was included in the Whitney Biennial, New York (2014) and Documenta 13, Kassel, Germany (2013). Adnan has received numerous awards for her contribution to culture, including, in 2014, France's highest cultural honour, the Ordre de Chevalier des Arts et des Lettres.
www.whitecube.com