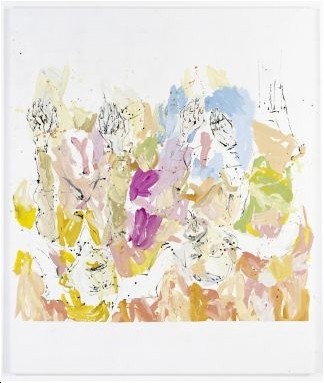 White Cube Mason’s Yard is pleased to announce an exhibition of major new paintings by the distinguished German artist Georg Baselitz. ‘Mrs Lenin and the Nightingale’ is Baselitz’s first show with the gallery and will be curated by Sir Norman Rosenthal.
Baselitz has created a series of sixteen large-scale canvases, subdivided into two groups of eight: one of white and grey paintings on a black ground; the other polychromatic on a white ground. The starting point for each work is a constructed photograph of Joseph Stalin and Vladimir Ilyich Lenin in an entirely fictitious meeting. The seated pose of the two notorious Soviet leaders is fused with that of Otto Dix’s Portrait of his Parents from 1924 which Baselitz has referenced previously in his work. The paintings are rich and multi-layered. They are intensively rendered in a variety of historical styles and techniques, from thick swathes of paint to light feathery brushstrokes and quasi-pointillist dabs. Still very much located within a broadly Romantic tradition, Baselitz explores and unravels the conventions of German Expressionism and Abstract Expressionism in this series of paintings but with a subtle and gently subversive nod to contemporary art, evident in their individual titles which name-check a whole host of his artistic peers including Lucian Freud, Richard Prince, John Currin, Damien Hirst and Jake and Dinos Chapman.
Like many of Baselitz’s most significant paintings made over the last four decades, the motif is painted upside down, distancing the viewer from the densely layered subject matter and heightening the interrelationship between serial image and painting as self-contained object. In addition, they will be exhibited in contrasting pairs facing each other across the gallery thereby confronting and, on occasion, trapping the viewer in an inverted face-off.
The sixteen paintings also allude to the fifteen states of the former Soviet Union created by Lenin and later ruled with unprecedented brutality by Stalin (known as ‘the Nightingale’ because he had been a chorister as a boy) with the series being completed by what has sometimes been described as the sixteenth state or Soviet Republic – the former German Democratic Republic. Baselitz was born in 1938 in the village of Deutschbaselitz in Saxony, twenty kilometres from Dresden, and grew up in the GDR. ‘Mrs Lenin and the Nightingale’ is therefore political and personal, an evocation of the historical landscape of the artist’s childhood and a satirical attack on Totalitarianism and the banality of evil. ‘In his recent work’, observes Sir Norman Rosenthal, ‘Baselitz seems to have achieved a lightness of being, a lightness of execution, a sense of spontaneity that overcomes the agony of the hard-won image however serious the motif or subject matter’.
Georg Baselitz emerged as one of the most important painters of the post-War period in Berlin in the early sixties. His work has been exhibited in almost every major museum in the world. Baselitz’s art was first introduced to a British audience in the seminal exhibition ‘A New Spirit in Painting’ at the Royal Academy, London in 1981 which also staged a major Baselitz retrospective in 2007 both of which were curated by Sir Norman Rosenthal.
A fully illustrated catalogue, with a text by Sir Norman Rosenthal, will be published to coincide with the exhibition.
www.whitecube.com