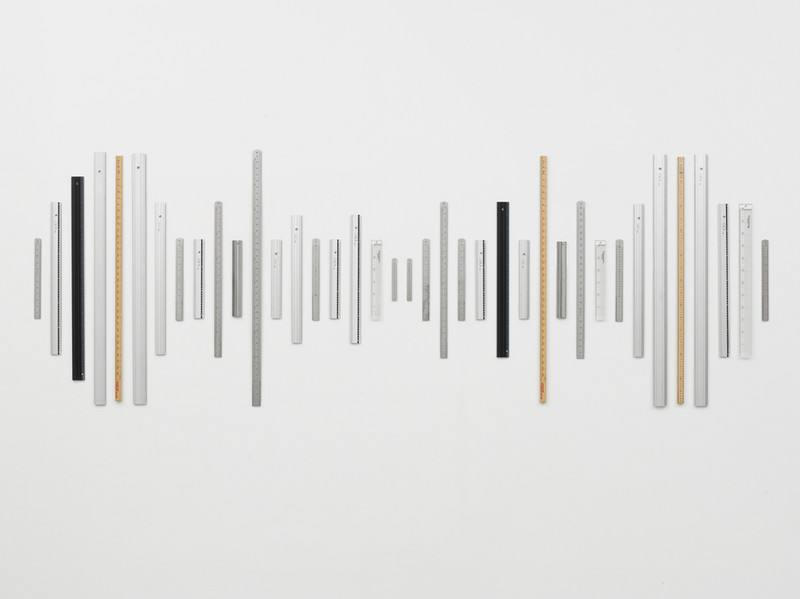 'I try to investigate the originality of things and ask, what is original? What is repetition? Although the work comments on originality, it also consists of a presence. Which comes first? One part derives its identity through the other in a closed circuit.'
Jac Leirner in conversation with Adele Nelson, Fundación Cisneros

White Cube Mason's Yard is pleased to announce an exhibition of new work by Brazilian artist Jac Leirner. Entitled 'Hardware Silk', this is Leirner's first exhibition in London. Since her emergence on the international art scene at the beginning of the 1990s in dOCUMENTA (IX) (1992) and in the exhibition 'Sense and Sensibility: Women Artists and Minimalism in the Nineties at MoMA, New York' (1994), Leirner has become one of Latin America's leading conceptual artists.

The title 'Hardware Silk' derives from Leirner's obsessive accumulation of ordinary 'found' objects and ready-mades that become materials for her art. Specialist nautical ropes, colourful climbing clips, chains, steel cabling, domestic curtain rings or precision instruments such as spirit levels and rulers, are all items that Leirner uses and objectifies in her interventions and reconstructions. Leirner adopts a formal rigour and aesthetic to the way she collects, arranges and assembles, evident in this exhibition, which includes sculptural wall reliefs, a group of watercolours and a single, 19 metre-long installation that divides the lower-ground floor gallery.

In Portuguese, cigarette rolling papers are called 'papeis de seda' which translates into English as 'silk papers'. Leirner has been an avid smoker for most of her life and through this habit, has come into contact with the various types, colours and formats of these papers. She subsequently became fascinated with the minimal and insubstantial nature of this material for the same reasons that she adopted the incidental ephemera of the museum world - its artwork labels and business cards - in previous work. In the lower-ground floor gallery, Leirner has gummed single Rizla papers directly on to the wall in row upon row to form grids, creating a diaphanous monochrome or minimalist painting that flutters and transforms as the viewer walks past. Titled 'Skin' (2013), the installation references both the habitual, repetitive activity of rolling papers and the physical, tangible nature of this material: a delicate and translucent syphon used to smoke tobacco and pot.

In the diamond-shaped sculptural work 'Portrait No.2' (2013) postcards of iconic portraits by numerous artists including Alberto Giacometti, Pablo Picasso, Henri Matisse and Andy Warhol are laminated and suspended from a chain like a series of personal mementos. Below them, a row of uniform shapes in rainbow coloured plexiglass create an abacus-like structure which references, through its use of repetitive, coloured squares, the colour theory investigations of Josef Albers. Like all of the sculptures in this exhibition, 'Portrait No.2' inverts the hierarchical value and functionality of the items it presents through its union of triviality and preciousness and exhibits Leirner's own unique and transgressive touch to both singular and collective objects.

On Friday 17 May 2013 at 1pm, Jac Leirner will be in conversation with Jochen Volz at the ICA, London.

Jac Leirner was born in São Paulo, 1961, where she lives and works. She graduated in visual arts from Fundação Armando Álvares Penteado - FAAP. In 1983 and 1989, Leirner participated in the Bienal de São Paulo and in the Aperto at the 44th Venice Biennale (1990). In 1991, she had a residency and exhibition at Walker Art Center, Minneapolis and Museum of Modern Art, Oxford. She participated in dOCUMENTA (IX), Kassel, Germany (1992) and represented Brazil at the 47th Venice Biennale (1997). Further solo exhibitions include Yale School of Art (2012); Centre d'Art de Saint Nazaire, France and the Estação Pinacoteca do Estado de São Paulo (2011); Miami Art Museum (2004); Museu de Arte Moderna de São Paulo (1999) and Centre d'Art Contemporain Geneva (1993).
www.whitecube.com