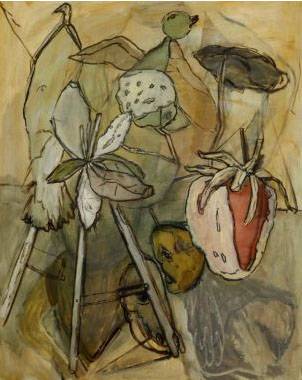 White Cube is pleased to present 'Now is the discount of our winter tents', an exhibition of new paintings and works on paper by Neal Tait. For this exhibition, Tait has made a total environment, an installation with painted walls and a bench where visitors can sit and contemplate the works (a re-make of a distinctive 1980s design). The bench echoes the strange conjunctions of craft and technology that is a key concern in Tait’s paintings and the installation as a whole can be seen as a reaction to the inert nature of the ‘white cube’ or gallery space.

Tait is interested in the way that themes and ideas can become redundant through their overuse and in the way that old stories or ideas can be reconfigured to open up space for new meanings and associations. For this exhibition, Tait has created a body of work which although treated with a certain lightness in both mood and spirit, carries with it a resignation to its own possible failure. These paintings, like much of the artist’s work, have circuitous themes without obvious single entry or exit points and are underpinned by a strange, almost absurd logic. Narratives and sub-narratives are implied through collaged visual elements that have the seamless fluidity of a dream or the rhetoric of a fairy tale combined with the perverse playfulness of surrealism.

Often Tait’s paintings seem to hinge on visual transformation where objects and images – a hat stand, a coat or a bunch of flowers, for example – carry the potential to become strange and unsettling visions. At the centre of a large plant, a small, blue head emerges, the leaves appearing like some huge, oversized baby’s bonnet. In one picture, a man dressed in what seems to be medieval costume bares his backside to give birth to a child, next to an incongruous towering bouquet of flowers. In another work, we see a woman crying and a disembodied purple hand reaching from beyond the picture plane to offer comfort. Tait’s cast of characters range from the heroic to the deeply pathetic and are often developed from a simple point of departure such as a story in a newspaper, a found photograph, a photograph taken by the artist, or one of his many preparatory drawings. As Michael Bracewell has observed, these paintings “take their compelling place as transmissions from what might be a world running parallel to our own: a world with its own time, its own dramas, its own cast of species, its own social hierarchy and its own way of doing things.”

A fully illustrated monograph on the artist, with essays by Michael Bracewell and Jeremy Millar, will be published by Other Criteria, London, in September 2006.