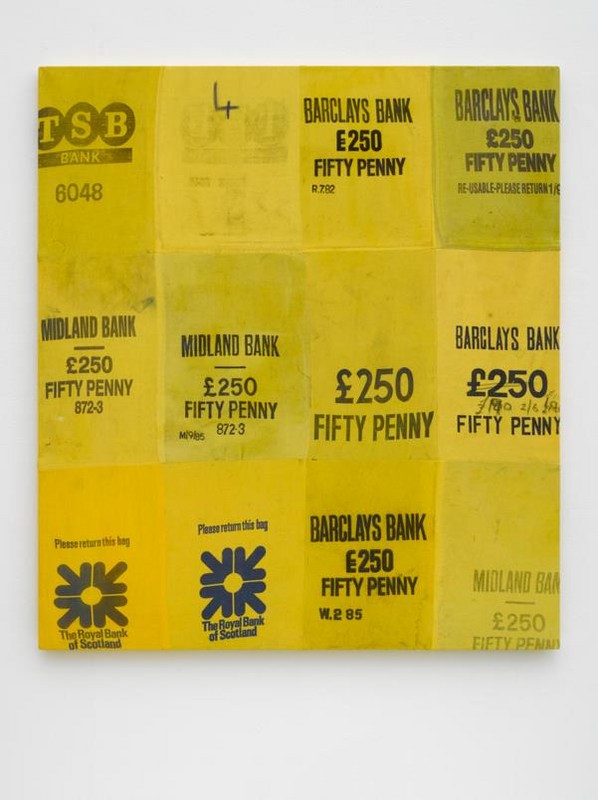 White Cube Bermondsey is pleased to present ‘Moneybags’, an exhibition of new work by New York based artist Sergej Jensen. Since the early 2000s, Jensen has regularly included cloth bank bags in his work, which he sews together to make geometric paintings. ‘Moneybags’ is the first exhibition to focus on this motif within Jensen’s mode of production, and will also include new representational works that use bank bags as their painterly ground.

Jensen’s approach to painting is unconventional in that it can frequently involve a complete rejection of paint itself in favour of textiles – found or worn materials that reflect a history of use. In this series, Jensen limits himself to one type of basic material which is uniform in style but differs in colour, weave and size. Obtained from federal and municipal banks in Europe and the USA, the bags are occasionally branded with either the name of the bank or their original monetary contents, and represent a standardised unit as well as being a signifier of past economic value.

Jensen sews the bags into simple, grid-like compositions that take on the formal properties of geometric abstraction. In one work, for example, a number of brightly coloured bags are assembled together and then glazed over several times with dark, muted hues. Areas of the picture have then been sanded away to reveal the structural details beneath, bringing elements such as old pen marks and scribbled value information back to the surface. In another work, a grid of worn ‘Barclays Bank’ bags is painted over with champagne chalk primer to create a distressed grey monochrome.

Recently, Jensen has started to work with representational imagery taken from classical painting. In these works, Jensen primes the linen bags with a solid colour, which becomes the ground for images made with a diaphanous application of acrylic paint. One example depicts a group of men on horseback mid-battle, taken from Leonardo da Vinci's famous ‘lost’ painting The Battle of Anghiari (1505).
www.whitecube.com