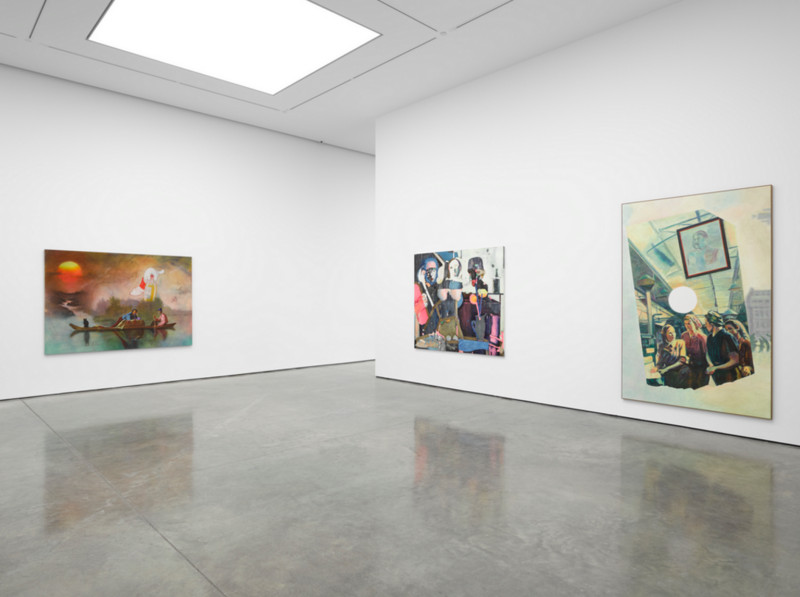 The group exhibition ‘Tightrope Walk’ brought together paintings by close to fifty artists in an effort to illuminate how the act of making a representational painting became redefined over the past century, following the emergence of abstraction as a competing proposition. Since then, representational painting has always been made in cognisance of abstraction – sometimes polemically against it but more often incorporating aspects of it into a new synthesis. The exhibition drew on some of the forms in which this contentious encounter has taken place and its impact on the many ways painters have revised their conception of what representation can be.

Francis Bacon explained his art to David Sylvester as ‘a kind of tightrope walk between what is called figurative painting and abstraction.’ He continued, ‘It will go right out from abstraction, but will really have nothing to do with it. It’s an attempt to bring the figurative thing up on to the nervous system more violently and more poignantly.’ Just as Matisse’s liberation of colour and Picasso’s deconstruction of form helped make abstraction possible, the prevalence of abstraction has encouraged figurative painters to incorporate the geometry of the Constructivists and the free gesture of Abstract Expressionism, as well as following Duchamp in responding to and incorporating mechanical reproduction and the photographic. Some fragment the depicted body or recombine these fragments into new synthetic combinations. Sometimes objects become stylised signs for human presences and absences – or vice-versa, the human form is objectified. Some painters continue to work from an encounter with the model, but the result is just as likely to be a dichotomy rather than an accord between perception and depiction; others cut the cord to any pre-existing reality in order to deploy images purely as means of fiction and metaphor.

In many different ways painters before and since Bacon have been walking this tightrope between abstraction and the recognisable image, and the results have included some of the greatest works of the last century as well as this one. This exhibition looked specifically at what effect the advent of abstraction has had on painters’ determination to continue painting non-abstractly. It aims to open new perspectives on familiar artists and to draw some of the lines connecting a number of today’s best painters to their modernist forebears.

A fully illustrated book, with an essay by Barry Schwabsky, was published on the occasion of the exhibition.