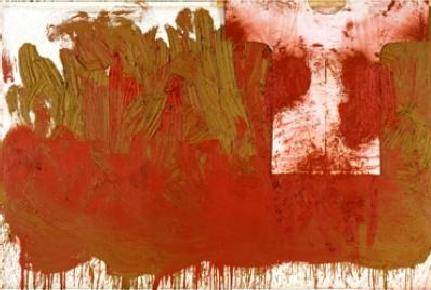 The Austrian artist Hermann Nitsch is considered the most important pioneer of Vienna Actionism, which initially made a name for itself with action painting influenced by tachism and abstract expressionism in the 1950s. Nitsch developed beginning in 1958 his concept of the Orgy Mystery Theater, a Gesamtkunstwerk that claims the attention of all the senses.
A psychoanalytic dramaturgy attempts to effect a catharsis in the viewer by staging excessive actions. Nitsch, a painter, sculptor, performance artist, writer, and musician, directed the Orgy Mystery Theater in 1998 for the first time in its entirety with around 500 participants at Schloss Prinzendorf, Lower Austria. The Documenta IV artist has written that all exhibitions, performances, concerts, and actions since 1958 were preparatory projects for the 1998 event.
After Hermann Nitsch is exhibited in China for the first time, Nitsch`s part in the exhibition follows this idea. It shows with painting and ‘Schьttbildern’, video, photography and relics a comprehensive overview of Nitsch’s work, at the focal point of which is the Orgy Mystery Theater.
Yang Shaobin was born in 1963 and now lives in Beijing. In his 2004 catalogue, he included beside works by Francis Bacon and Arnulf Rainer, artists who influenced him in various ways, a photograph of a crucified ox, with an ripped open corpse and a person tied to him, taken at Hermann Nitsch’s Six Day Play from 1998.
With these illustrations, Yang pointed to a central issue in his work: the tension between individual violence and compassion with the human creature. The painter and sculptor graduated in 1983 from Hebei’s Light Industry Institute, then becoming a policeman. He “dropped out” later, and moved in 1991 to Beijing’s artist village Yuanmingyuan. He participated in his first exhibition in 1993 at Beijing’s Friendship Hotel, a hotel for foreigners.
In 1999 Harald Szeemann invited him to the ‚48th Venice Biennale. It was also Szeemann who presented Nitsch at documenta IV. As the self-trained Yang Shaobin struggled to find a style of his own, he attempted to approach the “cynical realists,” then to reject them, moving to his own naturalist-expressive style. By the end of the 1990s, he had found his way to his own idea of painting. The brush stroke became broad, and slapped onto the canvas, in blood-red paintings there were colors that are reminiscent of the runs of paint in Nitsch’s Schьttbildern. In so doing, the paintings, in recourse to Chinese visual iconography, became flatter, Yang Shaobin hermetically closed the backgrounds of the monochromatic works and denied his works visual space. Yang Shaobin is the first Chinese painter to no longer concern himself with China’s “national question,” and finds a universal statement or visual language.
Seven large and middle-format paintings and a sculpture by Yang Shaobin will be shown, which in certain aspects refer directly to Hermann Nitsch’s work.
With the exhibition Hermann Nitsch/Yang Shaobin Alexander Ochs continues the exhibition series begun in 2003 in Shanghai, EurAsianDialogues. The series has included up until now the exhibitions Jцrg Immendorff/ Fang Lijun; A.R. Penck / Lь Sheng Zhong (2004) und Franz Gertsch / Fang Lijun (2005); now offering an encounter between Nitsch and Yang Shaobin.
The exhibition will be opened by the Austrian Ambassador to China, Dr. Hans Dietmar Schweisgut, the director of MuMOK – Museum fьr Moderne Kunst/Stiftung Ludwig Wien, Prof. Edelbert Kцb and the director of the NAMoC – National Art Museum of China Fan Dian.