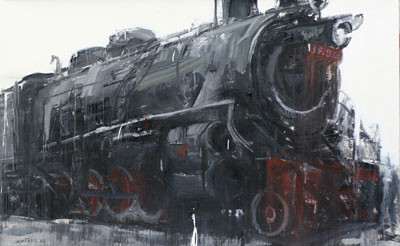 When Alexander Ochs opened his gallery in April 1997, he presented four Chinese artists, amongst others Ding Yi, and named the exhibtion ach: tongue. No Chinese Art. Ten years later and Chinese art is booming, but the concept has stayed the same. It was never about 'the Chinese', but about contemporary art from East Asia. In 2002, the art dealer and curator opened an interim-space in Shanghai, presenting Fang Lijun from China next to the well established German artist Jörg Immendorff, thereby adding a new facet to his engagement. When he then founded the Beijing-branch WHITE SPACE BEIJING in March 2004, he showed works by Chinese Miao Xiaochun and Israeli female artist Rivka Rinn as a further international initiative. Once again it was clear that the gallery not only understands itself as a forum for Asian art, but also spurs on artistic exchange.
Alexander Ochs was able to convince Dr. Reinhard Spieler, former director of the museum franz gertsch (Burgdorf) to curate the exhibition marking the 10th anniversary of the Berlin gallery. He has already worked with the curator on several successful projects: the museum showed the gallery-artists Xu Bing and Fang Lijun – and in turn, Fang Lijun was presented in dialogue with Franz Gertsch at WHITE SPACE BEIJING.
The exhibition Inferno in Paradise joins 19 artistic positions from all over Europe and Asia in various media such as painting, woodcarving, sculpture, installation and video. Oppositions, but also affinities in the artistic ideas and strategies in West and East are juxtaposed in pointed confrontations.
Spieler not only staged single artistic positions, but also entire subject areas as antipodes: Thus images of an aestheticized and idealised nature (Wolfgang Laib, Franz Gertsch, Yoshihiro Suda, Heribert C. Ottersbach, Wang Yin) are facing pictures of the traumatized human-being (Marlene Dumas, Yang Shaobin, Yoo Junghyun, Fang Lijun).
Inferno in Paradise can be consistently related to both culture areas: Not Only with developments in present-day China, seeing itself exposed to a turbo-capitalistic conflagration – but also with Europe, whose perspective of wealth seems to be threatened by precisely this kind of economic competition from the Far East.
www.whitespace-beijing.com