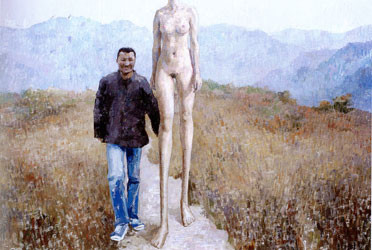 You can avoid facing the mirror, or decide in what state you look at it, and for how long: but the matter is different when it comes to dreams and visions. After the great response to his exhibitions at Hunan Provincial Museum in Changsha and Seoul Museum of Art (Korea), Chinese artist Wang Yin (born in 1964) holds his first solo exhibition in the West. His paintings, done in oil on canvas, lead us into his inner cabinet of mirrors.
Wang Yin (born in 1964) studied painting in the stage design program at Beijing’s Central Academy for Theater. His often roughly, pointillistic portraits, still-lifes, cloud studies, and landscapes done using a long perspective, which emerged until the start of this year, were quite reminiscent of stage set painting. Now, in the framework of this Berlin exhibition, the new works of Wang Yin walk along a tightrope of this artistic concept: distorted in terms of perspective, the scenarios, painted with a much finer brushstroke, move towards almost surrealistic constellations of figures—including the artist himself—and surroundings.
Already in his earlier works, Wang Yin denied the validity of the autonomous artist or work. One conceptual result of his skeptical attitude was his collaboration with traditional commissioned painters. For example, the paintings of the Flower series are done in part or entirely by unnamed commercial painters specialized in folk art or landscape painting.
Wang’s works allow us to survey the history of painting as a genre, and in so doing the artist makes no distinction between the Western and the Chinese traditions. By distorting typical pictorial themes in his obviously insolent reception, he challenges us to redefine the medium. The age in which the painter produced representative portraits, meditative still-lifes, or Arcadian landscapes, used clichés like that of the naturalness of the painter or was used for purposes of propaganda, are part of art history, not the present.
The mirror metaphor in the exhibition title points to the sphere to which Wang Yin is moving in his new works. It is the dream images, hardly to be captured in words that refuse an external, logic. Trees become thin female figures, a riverbed becomes a path, the earth appears on the horizon.
www.whitespace-beijing.com