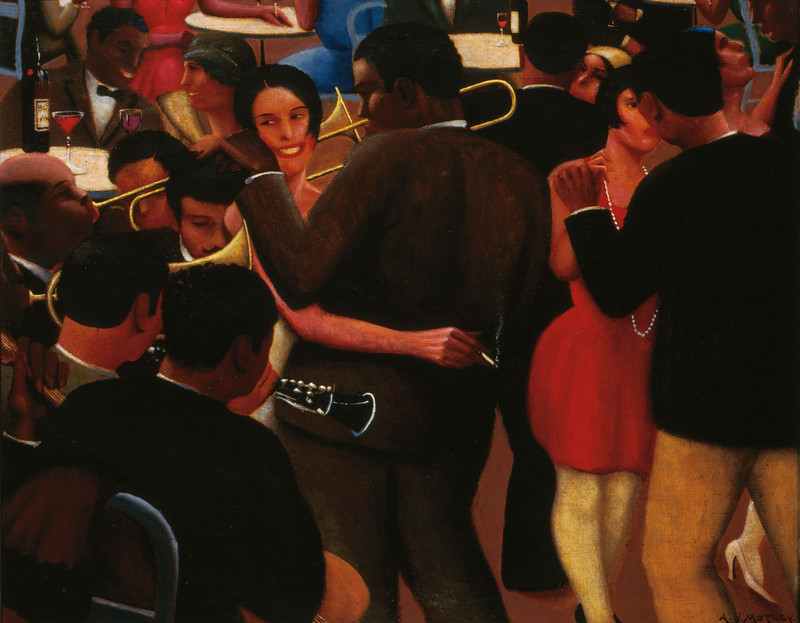 Archibald John Motley Jr. (1891–1981) was a bold and highly original modernist and one of the great visual chroniclers of twentieth-century American life. He first came to prominence in the 1920s during the early days of the Harlem Renaissance—the cultural flowering of African American art, music, and literature that extended beyond the New York neighborhood of its name to other cities, notably Chicago, where Motley spent most of his life. Motley had a long career and enjoyed recognition for his work early on, yet went through subsequent periods of struggle and obscurity.

Motley was born in New Orleans, but his family moved to Chicago when he was quite young, and he later became one of the first black artists to attend the School of the Art Institute of Chicago. His training there was academic, rigorously focused on the human figure, and steeped in European tradition. Motley’s sophisticated understanding of art history is especially apparent in his sympathetic portraits, but it was a history that he challenged and advanced with his raucous scenes of everyday urban life.

While Edward Hopper, Thomas Hart Benton, and Reginald Marsh became much more famous than Motley for their American scenes, he also developed and elucidated his own archetypes of place and people in this country, albeit unapologetically based on African American subject matter. As the work on view in Archibald Motley: Jazz Age Modernist eloquently attests, Motley rightly holds a place among the great American modernists. The artist created a far more daring visual language than many of his contemporaries, fusing vivid narrative with dizzying spatial distortion and jarring hues to produce striking settings for characters of diverse racial backgrounds and social classes. And while his portrayals range from serene and august portraits to abrasive or outrageous caricatures, all were his instruments for addressing the poignancy, folly, and complexity of modern life.

This exhibition is made possible by the Terra Foundation for American Art; the National Endowment for the Humanities: Exploring the human endeavor; and the Henry Luce Foundation.
www.whitney.org