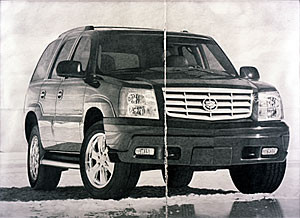 The Price of Everything... Perspectives on the Art Market addresses the different, overlapping micro-economies that comprise today’s expanded art market, structures that are often invisible to the casual observer. Taking its title from Oscar Wilde’s definition of the cynic as “a man who knows the price of everything but the value of nothing,” the show explores how artists have responded to the distinction between price and value, or to the erasure of that distinction. The featured works investigate the commercial aspects of exhibition and display, engage the concept of speculative value, or shed light on the role of the collector. Bringing together older and contemporary artworks, the exhibition reveals the playful side of works that seem grounded in explicit critique and locates critical subtexts in pieces that, at a first glance, might not appear to directly address market mechanisms.

From Robert Morris’s 1969 Money, a proposal that the Whitney Museum invest $50,000 as a work of art—a performance piece in which capital does the performing—to Christian Jankowski’s art/retail role-reversal video piece Point of Sale (2002), the works reflect on the economic conditions of their reception and circulation. In Karl Haendel’s $56,055, 2005 (2005) the price of the picture, a life-size drawing of a Cadillac SUV, is pegged to that of its subject matter; while in Conrad Bakker’s works the emphasis is on our economic expectations of the exhibition space itself (including a site-specific nod to the Graduate Center’s own history as a former department store). Elmgreen and Dragset’s road sign, which points towards their sealed Prada store in the Marfa desert, is a reminder that these expectations extend far beyond the conventional gallery space too. Fareed Armaly & Christian Philipp Müller’s audio evocation of an opening and Fia Backström’s frieze of Artforum ads both address the background hum of commerce and its effects. The complicated give-and-take of art philanthropy is examined in a selection of artworks given to corporate donors under the auspices of the American Art Awards and in Marianne Heier’s Permanent Installation (5,783 Euros) (2005). Hans Haacke and Louise Lawler, in very different ways, both address the effects of the art market on the meaning of works themselves, while Danica Phelps and the Fine Art Adoption Network suggest parallel forms of dissemination and collection beyond the confines of the market.

Within the context of the current market fever The Price of Everything... attempts to correlate different kinds of investment—intellectual, emotional, as well as financial—and poses a series of questions about the kinds of returns that we expect from contemporary art.

Curators:
This exhibition was organized by the 2006-07 Helena Rubinstein Curatorial Fellows of the Whitney Museum of American Art Independent Study Program: Martin Braathen, Stéphanie Fabre, Minnie Scott and Mike Sperlinger, in an ongoing collaboration between the Whitney ISP and The Graduate Center, The City University of New York.

Screenings:
Wednesday, May 30, 2007 7pm
America's Pop Collector: Robert C. Scull, Contemporary Art at Auction
Dir. John Schott & E.J. Vaughn (1974)
A rare screening of a documentary about the 1973 auction of Robert and Ethel Scull’s Pop art collection, which set records for sales of works by living artists and was in itself a cultural event. E.J. Vaughn will introduce the film.

Founded 35 years ago as an innovative, alternative approach to the education of young artists, curators, art historians and critics, the Whitney Museum of American Art Independent Study Program is now widely known and highly respected in both the art and academic communities in the U.S. and throughout the world. The program provides a unique setting for the critical study of the diverse practices, discourses and institutions that constitute the fields of artistic and cultural production.