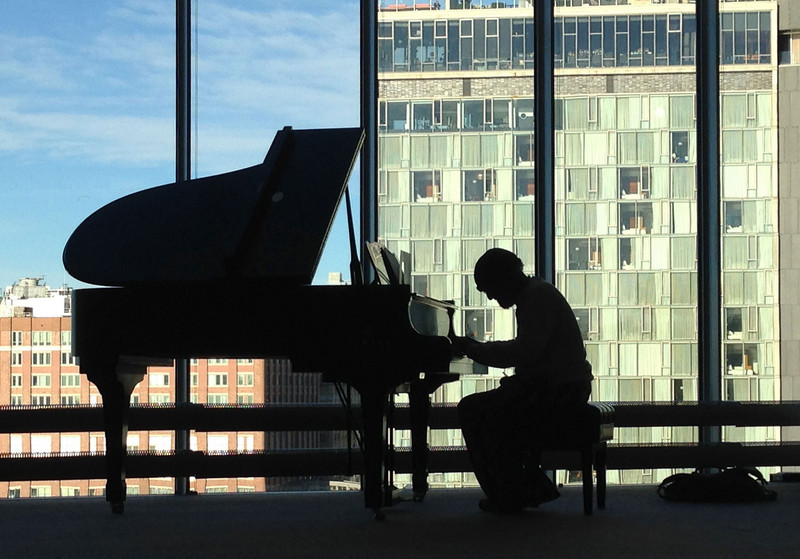 From February 26 through May 14, 2016, the Whitney Museum of American Art will present Open Plan, an experimental five-part exhibition using the Museum’s dramatic fifth-floor as a single open gallery, unobstructed by interior walls. The largest column-free museum exhibition space in New York, the Neil Bluhm Family Galleries measure 18,200 square feet and feature windows with striking views east into the city and west to the Hudson River, making for an expansive and inspiring canvas.

Pianist Cecil Taylor (b. 1929) is one of America's most innovative and uncompromising living musicians. His pioneering work in free jazz, which draws on myriad different musical styles conveyed through radical improvisation, will be featured in the fifth-floor gallery, where he will perform on occasion, along with homage performances by friends and fellow artists. This exhibition celebrates the artist’s extraordinary life and work in a retrospective environment that will include documentation of Taylor’s career through archival videos, audio, notational scores, photographs, poetry, and other ephemera, accompanied by a series of live performances featuring over twenty of Taylor’s musical collaborators, as well as dancers, playwrights, poets, filmmakers and writers who have been deeply involved in his work (see complete schedule of events below).

Significant support is provided by The Brown Foundation, Inc., of Houston and Donald R. Mullen, Jr.

Bösendorfer 280SP concert grand piano is provided in-kind by Yamaha Artist Services, New York.
The curators would like to thank the following individuals for their invaluable guidance, support, and advice:

Cecil Taylor (b. 1929) is a towering, sometimes divisive figure within twentieth-century music. In the early 1960s, with fellow maverick artists Ornette Coleman, Albert Ayler and others, he revolutionized jazz by extending bebop into a radical terrain dubbed the "New Thing" or "free jazz"—the latter a term with political as well as aesthetic connotations given the social changes underway at the time in America. For Taylor, freedom meant a deep synthesis of the modern composers such as Béla Bartók and Igor Stravinsky that he encountered during his studies at the New England Conservatory of Music with the nuanced and original piano innovations of Thelonious Monk, Horace Silver, Bud Powell, and Duke Ellington, elaborated into an uncharted territory.

Taylor has extended the potential of jazz as an art form to include an exceptionally wide range of intellectual, conceptual, and spiritual expressions. The sheer speed and percussive attack of his piano playing, its extreme density of both ideas and notes, and his complete unlocking of pitch, harmony, rhythm, and tempo to exploit their vast multiplicities has for more than fifty years left some listeners baffled or overwhelmed and others ecstatically transfixed. Whether he is playing solo piano or leading one of his bands—which he often calls "Units" to underscore the structural, almost architectural nature of their improvisations—Taylor has remained an uncompromising musical innovator of the highest order. For him, music exists in a continuum that extends to all art forms, and his work is deeply informed by the artists he loves, whether musicians, dancers, architects, or poets. His expansive view of music has led him to write poetry himself (though rarely to publish it), and to branch out into dance and theater through his own performances and by working with a remarkably broad range of collaborators including The Living Theater, Dianne McIntyre, Adrienne Kennedy, Mikhail Baryshnikov, Heather Watts, and Min Tanaka.
www.whitney.org