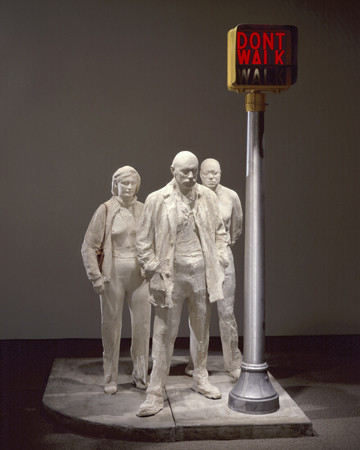 At a time when images barrage us everywhere from our televisions to our mobile phones, the latest reinstallation of the Whitney’s permanent collection galleries invites visitors to slow down and experience art in a dramatic new way. Singular Visions presents twelve postwar highlights from the museum’s holdings, each in its own space, in order to create intimate and compelling encounters with a single work of art. Each piece was chosen to convey a distinct impression and a specific sense of its maker’s vision, whether somber or celebratory, figurative or abstract, quiet or bold. Some of the works on view require their own spaces because they are large or comprise many parts, while others explore difficult topics or emotions that one might wish to consider in relative isolation. Through their variety of mediums, sizes, styles, and subjects, the works in Singular Visions encourage a range of powerful experiences and reveal how contemporary artists have stretched the very boundaries of what an artwork can be.