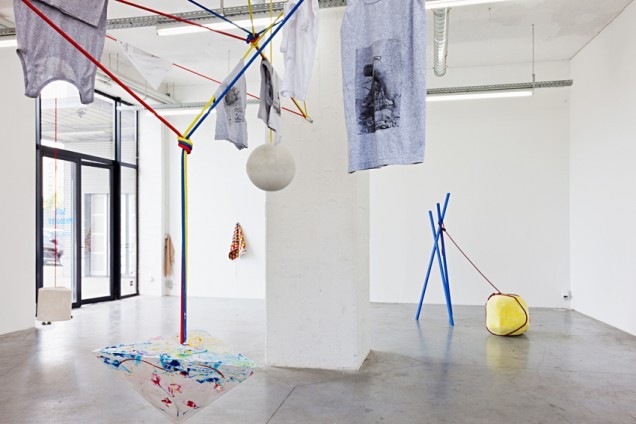 Soft Measures is a group exhibition curated by André Tehrani and Anthea Buys for the project space at WIELS Art Centre in Brussels. The project is a conclusion of Tehrani’s residency at WIELS and features a diverse group of young artists from Italy, Norway, South Africa and the United States.

Tehrani and Buys set out to make a group exhibition by employing the intuitive, often inexplicable processes of material and visual decision-making involved in producing works of art. The exhibition foregrounds the obscure but nevertheless central impulses that inform artistic production: the gut-feeling discriminations which gives preference to this over that, often as a result of a haptic, fetishistic or visual attraction to a specific quality or surface. This sensual intelligence plays an instrumental role in the processes of artistic production, but is curiously excluded from curatorial and mediative work in contemporary art. Soft Measures explores the possibility of curating as inhabiting and working through a sensual logic, rather than corralling works into a discursive structure. The purpose of this approach is to stage a shift in the dominance of discourse over visual and sensory properties in both artistic production and exhibition-making. Not only because discourse seems to have exhausted itself in contemporary art, but also because the subordination of the sensory to the discursive reflects an ideological bias that privileges reason, order, and inflexibility over provisionality and responsiveness. In so many fields of cultural history - in the histories of art, colonial education, Western philosophy, the written mediation of scientific discovery - this ideological bias is taken as a natural hierarchy. The only fitting way to challenge this notion is to work contrary to it (as opposed merely to writing contrary to it), creating space for the sensory, non-conceptual qualities that distinguish artistic practice to guide the formation of ideas and knowledge.

The counterpoint this exhibition seeks out is consolidated in the works that have been selected for the show through the metaphor of softness. In each work slack or unstable materials such as ropes, fabric and salvaged scrap provide a structure that gives the work its formal integrity. Moreover, several of the included pieces display a shared interest in obscure and ritualistic encounters with these types of flaccid and flexible materials.