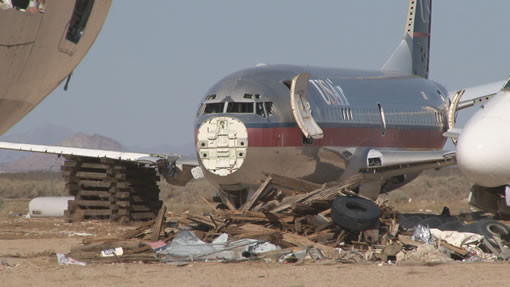 Wilfried Lentz Gallery is very proud to host filmmaker and author Hito Steyerl (1966, lives and works in Berlin), showing two different films by the artist, each for a period of three weeks. The first film Journal No 1 (2007), will start January 8th until the 28th and then on Saturday January 29th, at 3 pm Steyerl’s new film In Free Fall (2010) will have its Dutch premiere and will be shown as an installation for the latter three weeks of the exhibiton.

With her new film In Free Fall, Steyerl employs the setting and characters of an airplane junkyard in the Californian desert to tell the story of the current economic climate. Steyerl discusses the economic fallout of October 2008 by way of Sergei Tretjakov, Hollywood film sets, the materiality of DVDs, and prevailing conditions of production for cultural workers. The space of the junkyard allows various ‘crash’ narratives to unfold, with the stories of actual crashes and the remnants and afterlife of these machines becoming metaphors for economic decline. This is an investigation of planes as they are parked during the economic downturn, stored and recycled, revealing unexpected connections between economy, violence and spectacle, finding perfect example in the form of the Boeing 4X-JYI, an aircraft first acquired by film director Howard Hughes for TWA, which was subsequently flown by the Israeli Airforce before finding its way to the Californian desert to be blown up for the Hollywood blockbuster Speed. Through intertwined narratives of people, planes and places Steyerl reveals cycles of capitalism incorporating and adapting to the changing status of the commodity, but also points at a horizon beyond this endless repetition.
The installation includes a painting, by cameraman Kevan Jenson, Fifth Dimension (2010) with which Steyerl retroactively examines the production of her own film.

A prolific writer, filmmaker, theorist and teacher, Steyerl’s research and interests cover topics as diverse as cultural globalisation, feminism, culture, migration and racism. Her films are a montage of politics and pop, Hollywood and independent film, interviews and voice-over commentaries, which present provocative filmic analyses of the present.