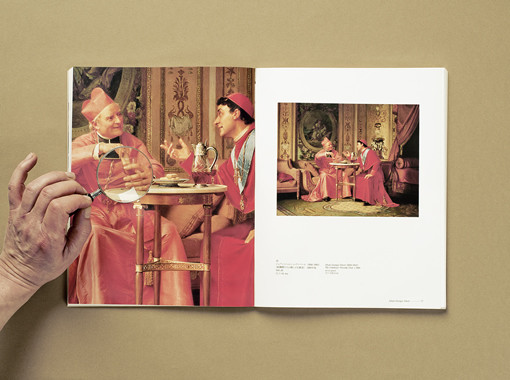 Wilfried Lentz Gallery is very proud to host, for the second time since April 2008, the artist Matts Leiderstam (1956, lives and works in Stockholm) with his show

Matts Leiderstam s show After Image will consist of a series of new works, all of them photographic. These images have been used to form an installation on the main wall of the gallery space.

In all of the photographs we see open folded art books or catalogues where the reproductions of historical paintings become the subject of a close reading. By steering our eye through the artist’s manual gestures and by pinpointing out specific details through magnifying glasses our gaze is directed to look at unexpected aspects. The images of the old paintings have been carefully chosen and are not without intention. Often there are hidden erotic, camp or queer connotations underlined. In the eye of the innocent beholder a waterfall in a pastoral landscape can suddenly becoming a vulva. Or the gesticulating hands of the artist mimic the very same gestures of the protagonists in the painting. And then sometimes there exists stories associated with the artwork that go beyond the depicted image in the painting itself. For example, one of the photographs shows two old paintings, which are the subject of a contemporary controversy regarding their provenance and ownership. The two paintings, Het Gebed van Tobias en Sara & Raphael bindt de duivel by Jan Steen, were recognized in 1965 as previously being one painting and thereby, they where pasted together in 1996. This painting is presently hanging in Museum Bredius in The Hague but only a few know that the right half of the stitched painting has been controversially claimed back by the heirs of the Jewish art dealer Jacques Goudstikker.

Similar to his earlier works Leiderstam is interested in the hidden meanings of artworks, what they tells us about the way we look at our environment and how we are still influenced by the way artists in earlier times depicted this. The origin of a painting and how it was shown can also be an interesting trigger in evoking new meanings like in the case of the painting by Jan Steen. During our show there will be another work by Leiderstam on view at the Witte de With-show The End of Money from the 21st of May till August 7. This work, Provenance, 2007-2011 tells the histories of eleven different paintings with the same motif ‘View of Dordrecht’, ten pictures by Jan van Goyen and one by Jeronymus van Diest, shown in a double projection.

Recent solo shows by Leiderstam include: 2010 at the Kunsthalle Düsseldorf (DE), the Malmö Art Museum (SW), Grazer Kunstverein, Graz (AU) and the Turku Art Museum Turku (SU). 2008 at the Salon Museum of Contemporary Art (Belgrade) and 2007 at the Badischer Kunstverein (Karlsruhe). His project, Grand Tour, was shown at Magasin 3 Stockholm Konsthall (Stockholm) 2005, after which it travelled to DCA – Dundee Contemporary Arts (Scotland), Göteborgs Konsthall (Gothenburg) and Kunstmuseum Liechtenstein(Vaduz).
www.wilfriedlentz.com