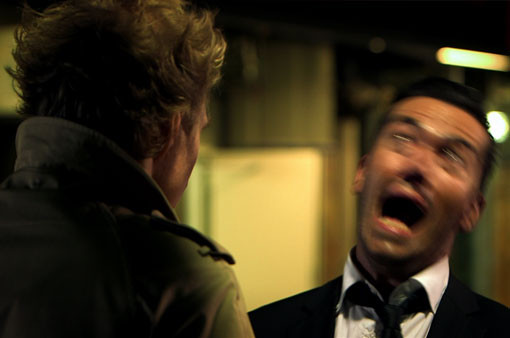 Wilfried Lentz Rotterdam is very proud to host artist, performer and director of behavior Michael Portnoy (b.1971, based in New York) with his second gallery exhibition

In a world where everything looks the same, it ain't easy making monochromes...

What are the war cries of Neo-Formalism? Are there any? Or are its fighters and agents doggedly anti-dogmatic?
THRILLOCHROMES imagines a subterranean world where such overblown directives (Dismantle... ! Infiltrate... !) are the scores for a collection of trench-coated operatives in a series of abstract thriller films which lead to the creation of excruciatingly beige monochromes.

The show consists of six monochromes and six corresponding short films playing on tropes of TV procedurals and espionage films. Accompanying the show is an artist publication - in the series published by the gallery - with texts by Tirdad Zolghadr and Diane Bent commenting on the phenomena of the contemporary monochrome and the blood battle between hermeneutics and hermeticism.

The six short films, commissioned by Ville de Paris for Nuit Blanches 2013, were shot in the WWII bunkers beneath Gare de l'Est. The series continues Portnoy's recent interest in "improving", in the manner of an engineer/futurologist, recent dead-ends of contemporary art making. In this case the metastasis of textural abstraction and quasi- monochromes.

Thanks to:
Ieva Misevičiūtė - co-director film
All actors and film production team
www.wilfriedlentz.com