to scrap a proportion 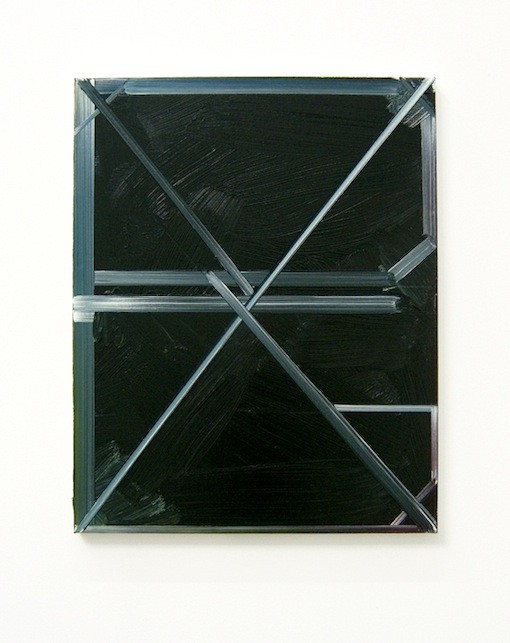 This show has grown associatively, from the starting point of a collection of graffiti ridden note-boards, formerly in use by children whilst visiting an archeological museum. In the selection of works, two main paths of characteristic arose, that of 1) formal and structural play with the written word, such as reiteration, tabulation - including how one would write and with what, and 2) heresy: disregard for rules and formula, and the potential for an anarchism. Both of these paths seem to be embedded in the note-boards themselves, a kind of blue-print fit for expansion.

In a painting of Philomene Pirecki, a kind of compression is practiced whereby a monogram of the word grey is hatched through a mixture of all the colours which make up grey - in contrast to a selection of works by Josef Dabernig which behave as extrapolations for the purpose of a cleansing. In his case personal data is mined to reveal patterns in sources as diverse as his smoking habits and the refuelling of his Steyr Fiat Croma 154. A handwritten and letterpressed poster by Will Holder draws a likeness between the practices of the hairdresser and the concerns of typography, whilst in the silent video of Matthew Buckingham, dozens of nearly anonymous individuals jot the phrase, "Within the Sound of Your Voice", a registration which acknowledges the act of listening and being heard. Dina Danish shows a playful attempt to fit various items from chain-store Walgreens, to pieces of toast, before lifting them out of format, as if to be eaten as a sandwich. In a search for the perfect fit, and a study of coincidental proportion, the practice is mirrored in the capsized scientific scale of Jason Dodge, a precision measuring device rendered useless through one simple 90 degree rotation.

The exhibition is co-curated by James Beckett and Wilfried Lentz
www.wilfriedlentz.com