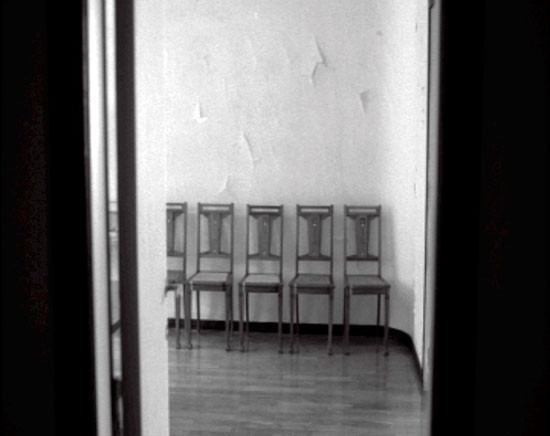 Garcia presents two works, FILM (Hotel Wolfers) (2007) and GAME (2008), which involve, be it passively or physically, the viewer. In both works Garcia references the history, limitations and conventions of the eponymous mediums as well as seeking to hold a mirror to the conventions of human behavior and how we structure our reality.

In GAME the viewer is presented with an interactive filmed interview with a psychiatrist in empty, stark hall. The man relates a range of stories involving the University of Heidelberg's mental health faculty, an institution that incubated the Nazi's persecution of mentally ill people and a terrorist organization composed of those with a mental illness that sort to use their problems as a weapon against society. The tone is somber and at times harrowing. Yet amongst this exists a word recognition game that requires the viewer to press any button on the accompanying computer keyboard when they hear any of the preset trigger words. The simplicity makes the whole situation feel like a psychiatric test itself. Is our own behavior being monitored? To what end are we being coerced into this action? As coerced as those with a mental illness were by the Nazis or the medial establishment? There is a frustration there to, one that mirrors the frustrations of mental illness: however well one does in the word recognition, the end of the film remains the same: our behavior solves nothing.

Garcia takes a less tangible reference point to cinema within FILM (Hotel Wolfers). Shot in monochrome 35mm film, the work juxtaposes two narratives. The first is played out visually in subjective camera mode. It takes a personified, detailed, tour of the decaying Hotel Wolfers in Brussels, designed by Henry Van de Velde. The pace is slow and observing. The second narrative is that of a spoken description, seemingly unconnected with the visuals, recounting the actions and shots of Samuel Beckett's only screenplay FILM (1965) that was one of the first to use the subjective camera technique. In doing so both filmmakers, past and present are coercing the viewer's behavior, if the camera propels us up the stairs to some unknown situation, the viewer can only let them. The viewer is the camera, which they control. Again, Garcia, makes us become a part of the work, yet blocks our behavior being able to achieve any independent result.

FILM (Hotel Wolfers) was one of eight video commissions for the H Box roaming screening hall, commissioned by Hermes. The H Box was exhibited at the Pompidou Centre, Tate Modern, MUSAC, Spain, MUDAM, Luxembourg and the Yokohama Triennale, Japan. Dora Garcia has previously exhibited at Manifesta 1998, the Istanbul Biennial 2003, Skulptur Projekte 2007, SMBA, Amsterdam, MACBA, Barcelona, FRAC Lorraine, Metz, and the ICA, London. She was born 1965 in Valladolid, Spain and lives and works in Brussels, Belgium.
www.amandawilkinsongallery.com