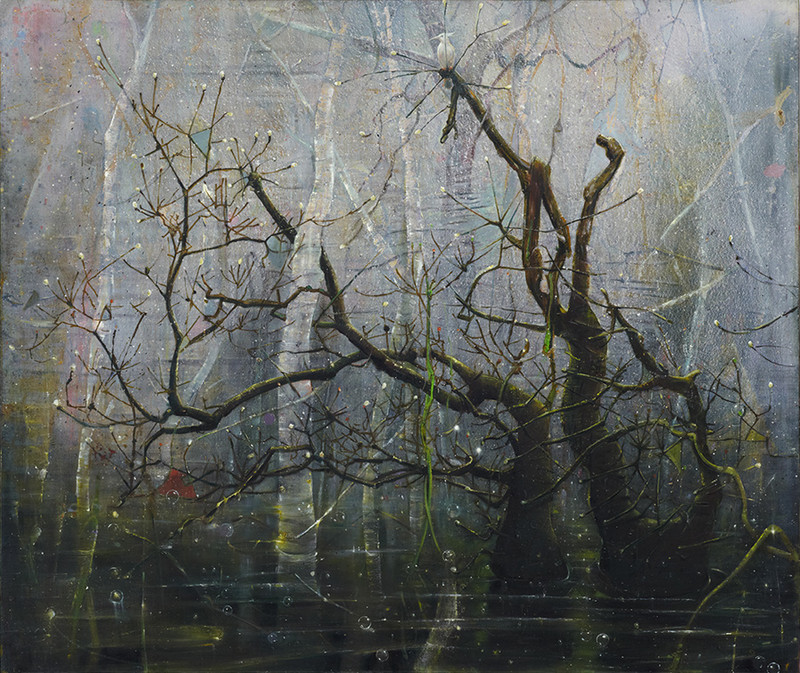 Wilkinson Gallery is pleased to present its third solo exhibition with London based artist Elizabeth Magill. The exhibition on both floors of the gallery brings together a body of work made over the past several years.
Magill works through a sequence of interlinked stages, using a variety of techniques and handling of paint; Works often begin by applying thin washes of oil paint to the canvas surface (often laid flat at this point) -then layers of detailed brushwork are applied – introducing more recognizable elements, often found in nature. However, the initial stages are as much about figuring out of the nature of paint, as nature itself. Magill’s technique chronicles pathways, mistakes and discoveries that occur throughout her painting process. Trees, birds and figures are emblematic of their original forms, but are transformed, so that they become feelings or indications, markers in the creation of an overall atmosphere.
Magill studied at the Belfast College of Art and later completed an MA at Slade School of Fine Art, focusing continuously around painting and its manifestations. She began exhibiting in the mid 1980s, with her first major solo exhibition at the Arnolfini Gallery, Bristol in 1990. A principal theme of Magill’s paintings is this notion of landscape. Her paintings hint at a romantic sublime. An aesthetic that acts as a backdrop and opens itself to further interpretation.
With Dendriform 10, 2012, Magill articulates her painting process further by transforming and abstracting the subject.
‘Dendriform’ means branch-like. Thick coverings of paint mark the surface, manifesting in heavy interconnected structures that fill and visually stretch the canvas to all its dimensions. The brushstrokes alter their existence, reminding us that they are suggestions and not reality. We can almost see traces of the buried pencil-lines that began the process. The marks begin as branch-like structures but can quickly take on other alternative shapes or forms, found not in art, but neuroscience - dendrites connecting neurons, or routing paths, reminding us of the interconnected web-like activities of daily life. Through the process of painting, images can emerge: full moons fill unknown landscapes acting as bright discs -flocks of birds scatter and puncture the canvas. Each image is on the edge -just like at dawn or dusk -it could tip either way. What we are looking at could just as easily disappear back into the paint, or emerge as an illusionistic land. Are these paintings dystopic scenes or are we an audience to a utopian pastoral idyll?