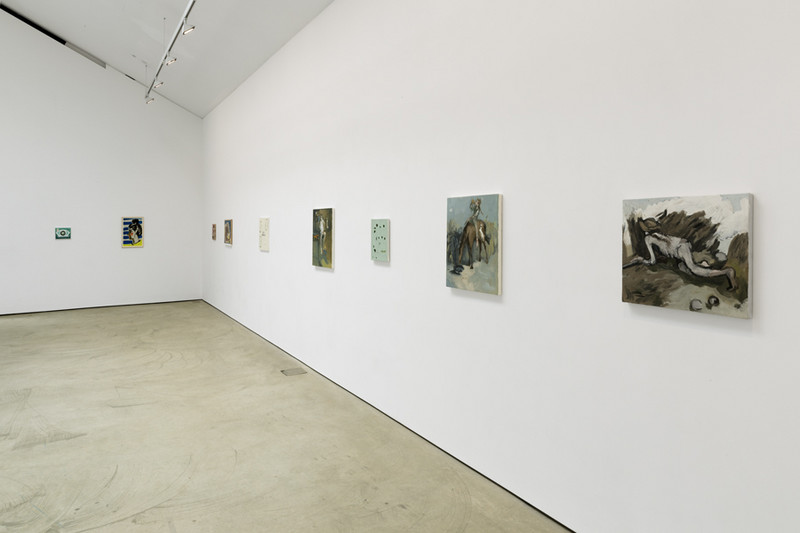 ‘Figuratively’ brings together the work of five artists: Jane Corrigan, Daniel Heidkamp, Ella Kruglyanskaya, Aliza Nisenbaum, and Daniel Rios Rodriguez. Four of the artists are based in New York, the fifth – Daniel Rios Rodriguez – is based in San Antonio, Texas. Organised by artist and curator Matthew Higgs, all five artists have had solo exhibitions at White Columns, New York, in the past four years. (Higgs has been the director of White Columns since 2004.) The exhibition runs in parallel to, and is partly installed with, a two-person exhibition of recent work by Matthew Higgs and Clive Hodgson

Whilst generationally related – all five artists were all born between 1977 and 1980 – each approaches figuration with radically different intentions and motivations. Together the five artists do not represent a school or tendency, instead they operate idiosyncratically, self-consciously adopting and adapting the multiple histories of representational image making to their own ends.

Jane Corrigan (b.1980) is a Canadian, New York-based artist. Corrigan’s paintings typically depict scenes drawn from the artist’s imagination that equally invoke art history and popular culture – and in particular the narrative forms of cinema and the novel. The scenarios in Corrigan’s paintings unfold in hard-to-determine eras, a slippery time zone that invokes Pieter Bruegel the Edler’s genre scenes as much as Walt Disney’s animated realities. Throughout her work Corrigan takes great risks with her engagement with humour, allowing it to surface whilst deftly holding it in check. Corrigan’s confusion of time (and place) affords her work a paradoxically timeless quality.

Daniel Heidkamp (b.1980) initially works en plein air, painting directly in front of his subjects - inc. portraits, urban landscapes, and a recent series of paintings of museum buildings (including the Frank Ghery designed Fondation Louis Vuitton in Paris.) Heidkamp has described this visceral approach to painting as “the central core” of his project. For Heidkamp this process is vital, enabling him “... to see my subjects unfiltered and unmediated.” Heidkamp’s plein air paintings then become the basis for subsequent paintings made in the studio, where he employs a more deliberate and often more schematic approach to the image.

Ella Kruglyanskaya (b. 1978) is a Latvian, New York-based artist. Kruglyanskaya’s work choreographs the ongoing adventures of her now-signature cast of female protagonists. Underscored by a sardonic wit, her work invokes a complex art historical lineage: a seemingly inexhaustible set aesthetic detours including Magritte’s ‘period vache’, the late paintings of Ernst Ludwig Kirchner, Elvira Bach’s work of the 1980s, Robert Crumb’s voluptuous imagination, and 1950s pulp illustration. In a recent series of paintings on paper - three examples of which are included here - Kruglyanskaya has created individual ‘portraits’ of her ever-expanding cast of characters.

Aliza Nisenbaum (b1977) is a Mexican, New York-based artist. Over the past three years Nisenbaum’s project has focused on a series of portrait and still-life paintings that collide her own family history – including still-life paintings of letters sent to the artist by her mother - with the lives of other individuals, including an ongoing series of portraits of undocumented immigrants currently living in the United States. About her approach Nisenbaum has said: “I discover in this process moments of privacy, interiority, and deep absorption for both my sitters and myself. Giving something or someone your attention can be a political act.”
Daniel Rios Rodriguez (b.1978) is a San Antonio, Texas-based artist. Emerging from an intensive drawing practice – which is often evident as a graphic armature in the subsequent painted works - Rodriguez’s approach is rooted in autobiographical narratives, creating in turn a deeply personal cosmology of images. Working mostly on an intimate, domestic scale, and embracing both folk and outsider-ish mannerisms - which is especially evident in his use of found objects and his ad-hoc framing devices – Rodriguez’s works self-consciously evoke both the material realities and the psychological tensions evident in the work of (fellow Texan artist) Forrest Bess

Jane Corrigan exhibited at White Columns in 2012, and has had subsequent solo exhibitions at Kerry Schuss, New York; and Retrospective, Hudson, New York.

Daniel Heidkamp exhibited at White Columns in 2014, and has had two subsequent solo exhibitions at Half Gallery, New York.

Ella Kruglyanskaya exhibited at White Columns in 2011, and has had subsequent solo exhibitions at Gavin Brown’s enterprise, New York; Kendall Koppe, Glasgow; Studio Voltaire, London; and The Power Station, Dallas. She will have a solo exhibition at Thomas Dane, London this September.

Aliza Nisenabaum exhibited at White Columns in 2014, she has had solo exhibitions at Lulu, Mexico City; and Mary Mary, Glasgow.

Daniel Rios Rodriguez exhibited at White Columns in 2011, and had a recent solo exhibition at Sargent’s Daughter, New York.
www.amandawilkinsongallery.com