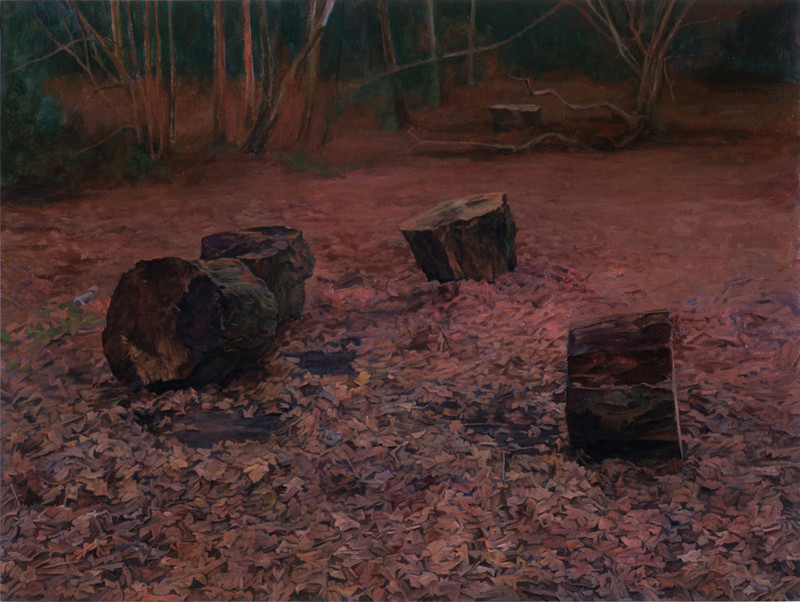 Go and catch a falling star,
Get with child a mandrake root,
Tell me where all past years are
Or who cleft the devil’s foot.
Teach me to hear mermaids singing,
Or to keep off envy’s stinging
And find
What wind
Serves to advance an honest mind.

George Shaw began making the paintings of the landscape of his childhood in the mid 1990s. What is often mistaken for a nostalgic or sentimental reverie was in fact less a looking back as a holding on, a fear of the inevitable working of time. He was interested in routing this vagueness, this amnesia within the traditions of social realism with nods towards Mass Observation, Free Cinema and the Kitchen Sink drama as well as the paintings of the British neo romantic movement in the first half of the twentieth century. His paintings often show the council housing, municipal playing fields, shops and bus stops dwelling on the unseen and unrepresented. Shaw has spoken of the contrast between the legacy of modernist dreaming and the reality of living within such a dream, of the misrepresentation of contemporary working class experience and the mythology of regeneration. In his most recent work Shaw observes the landscape so familiar to him as an archaeological site rich with untold stories, human remains and the left overs of unknown rituals. Mounds of rubble that were once pubs or factories become earthworks, vandalized walls and signposts and unreadable graffiti are transformed into acts of devotion, and bonfires and burnt trees suggest some sacrificial ceremony. We are a witness to what the past chooses to return to us. For the most part these painted sites remain dark and the intentions of their creators obscure. He began using the Humbrol Enamel paints after discovering that they were used in the murder of a child by children. Shaw visits the same sites over and over. His earlier work used many of the Christian festivals as titles to suggest the marking of time. The Last Days of Belief is an exhibition of fourteen paintings making an allusion to both the Stations of the Cross and his first paintings in this body of work, Scenes from the Passion. In each painting the artist depicts man-made and natural objects or events in the landscape that may be interpreted as having a greater significance than was otherwise intended. Thus a mound of concrete and tarmac in a suburban street may be seen as a tongue-in-cheek monument that conjures up the spirit of Silbury Hill, the covered-up tagging on a gable-end assumes mystical unintelligible gravitas and just why are tree stumps in the woods arranged in circles? It is not too far fetched to think of the act of making the paintings themselves as having some ritual significance for each painting is curiously subtitled with a lyric from a song from 1980.

‘My world is missing the old world monuments to birth, death, the bits in-between and the bigger bit afterwards. Such things were not woven into the landscape of my youth. Stonehenge or Avebury, impressive as they are, remain second hand goods worn down by time and worn out by use, symbolic of what is no longer there. They are monuments to amnesia. I’m burying the bodies as always and piling up the shit and unanswered questions against my own disappearance.’