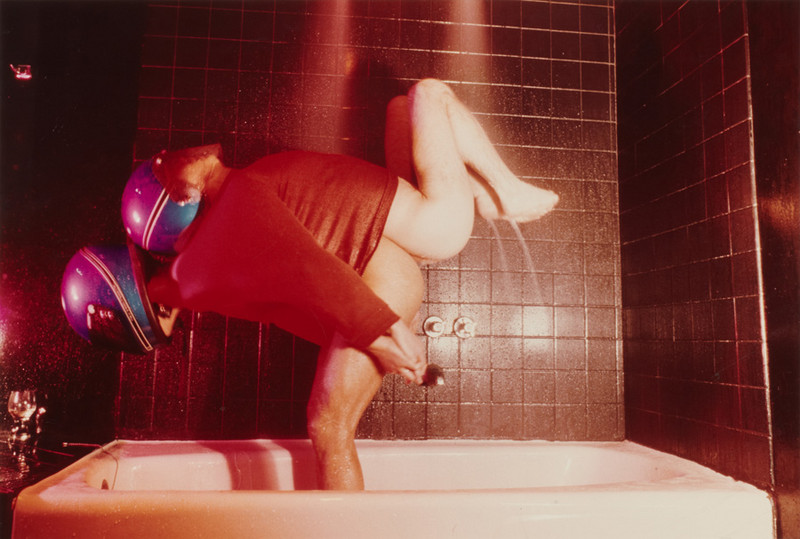 Wilkinson Gallery is pleased to announce its third solo exhibition by Jimmy De Sana (1950 – 1980), focusing on the colour photographs produced during the late 70s and early 80s.
De Sana made images rather than taking photographs. In the darkroom he enhanced colours and used solarisation to create his own particular photographic language. He played with the idea of the body as sculpture and the sometimes extreme sexual imagery was informed by the punk scene of downtown New York. The figures in the photographs were his friends. He also used his own body in some of the images, all of which were staged in his home and studio.
His photographs begin within a suburban setting, but one slowly infiltrated with the sexuality and absurdity that could only be found in a decaying lower Manhattan. De Sana was influenced from a young age by the writings of William Burroughs (with whom he collaborated on the earlier Submission series) an influence that dispatched the beatific, underground, punk sensibilities and the eccentric, perverse tone that came to define his photographs -the graphic exposure and leaking discovery of licentiousness, carried out within a suburban home. As Burroughs put it, “Look at these pictures in Submission...My dear, its all so Christian and medieval and gloomy.”
Jimmy De Sana’s work is currently included in the exhibition, Glam! The Performance of Style at Tate Liverpool and This Will Have Been: Art, Love & Politics in the 1980’s at The Museum of Contemporary Art, Chicago. Solo exhibitions include, Wilkinson Gallery (2008 and 2007), White Columns, New York (2007), Pat Hearn Gallery, New York (1997, 1995, 1988, 1986), and Galerie Jablonka, Cologne (1989). Group shows include This Will Have Been: Art, Love & Politics in the 1980’s, The Institute of Contemporary Art, Boston (2012-2013) and The Walker Art Centre, Minneapolis (2012), Off the Wall: Part 1 – Thirty Performative Actions, Whitney Museum of American Art, New York (2010), Looking at Music: Side 2, The Museum of Modern Art, New York (2009), Eat the Document, curated by Dean Daderko, Larissa Goldston Gallery, New York (2008), Blow Both of Us, curated by Shannon Ebner and Adam Putnam, Participant Inc, New York (2007), Erotophobia, Simon Watson Gallery, New York (1989), Staging The Self: photography 1840 -1985, National Portrait Gallery, London (1986), New York, New Wave, PS1, New York (1981) and Times Square Show, New York (1980).
www.amandawilkinsongallery.com