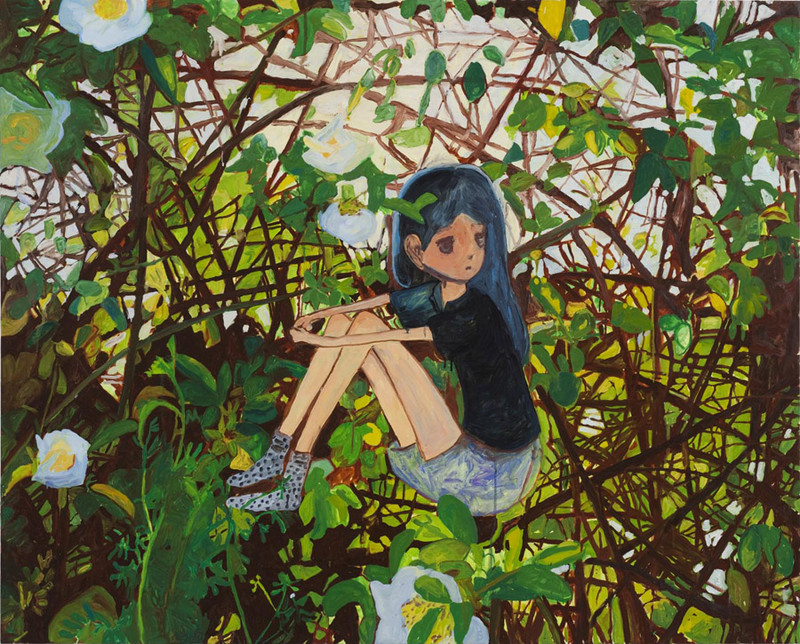 Wilkinson Gallery is pleased to present its first exhibition with Japanese artist Makiko Kudo. Kudo’s paintings are luxuriantly colourful explorations into the depths of imagination. These hauntingly beautiful paintings chart a quiet course between splendor and isolation.
Within Western culture particularly, fantasy and ideas of escapism are associated with an evasion from reality and renunciation of responsibility. Conversely, for Kudo’s generation, this introversion was an active means of resistance against a depressed national economy and the unyielding social structures that came to define Japan in the late 20th Century. This was a gener ation whose output was ins tead defined by a reversion into the alter-realities of manga comics and the rising prevalence of computer games. An influence echoed in the cartoonish and often surreal-like characters that populate Kudo’s paintings.
Likewise, Kudo’s decision to revert into the bodies of these impish figures, can be equated with her generation’s resistance to the constraints of adulthood and the perceived loneliness of such autonomy and social conformity. This was an artistic, as well as cultural, revolt against what was seen to be the uninspired perspective of the former generation.
These paintings effortlessly engage with the history of 20th Century painting; from Claude Monet’s water lilies to Henri Matisse’s Fauvist phase to the compositional complexity of William De Kooning’s canvases.
Take for example After a Typhoon, 2011; the energetic brushwork and beautiful range of colours are redolent of the similarly wild brushstrokes and vibrant palette of the Fauvists. There are echoes too, of the primitive wilderness of Rousseau’s dreamy landscapes, in a work like Floating Island, 2012. Kudo also draws inspiration from classical Japanese imagery; the delineated shapes and sparseness of paint in areas, give the paintings the destabilising illusion of flatness that is evocative of Japanese woodblock printing. Subtle differentiations of foreground imbue this horizontality with the effect of a world suspended, engendering a dreamlike atmosphere. Kudo’s compositions, which she describes as ‘chaotic’, follow a playful yet mysterious oneiric logic, whereby unknown or indecipherable elements merge according to a pattern beyond the conscious mind. It is this relationship between the once known and now forgotten narratives, of one’s dreams, that we experience when lost gazing into the depths of these paintings. It is the synthesis of these references to 20th Century painting, classical Japanese imagery and indeed the very territories of Kudo’s own imagination, which distinguish these paintings. The disorientating union of the unknown and familiar, haunting and beautiful, magical and banal, imbues these canvases with an enchanting quality that imaginatively transgresses boundaries and leaves the viewer absorbed.
Makiko Kudo was born in 1978 in Aomori Prefecture, Japan. She lives and works on Kanagawa Prefecture, Japan. Recent solo exhibitions include Mark Foxx Gallery, Los Angeles (2011); Anderson’s Contemporary, Copenhagen (2010) and Tomio Koyama Gallery, Tokyo (2007). In 2009 Kudo was included in the important touring exhibition; ‘Winter Garden: The Exploration of the Micropop Imagination in Contemporary Japanese Art’, curated by Midori Matsui at Hara Museum of Contemporary Art, Tokyo which then toured to Japanisches Kulturinstitut, Cologne, Germany in 2009; The Japan Foundation, Toronto Canada in 2010 and Galeri'a Arnold Belkin, Museo Universitario del Chopo, Mexico City, Mexico in 2011. Makiko’s work is included in several large museums across the world including; Modern Art Museum, Fort Worth; Olbricht Collection; The Museum of Contemporary Art, Los Angeles and the Takahashi Collection, Tokyo.
www.amandawilkinsongallery.com