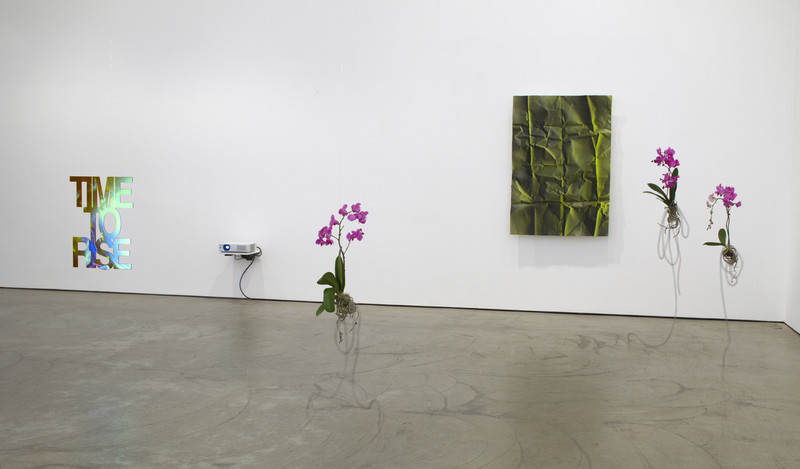 Thirty years after 1984, the future seems to be closing in on us. The realities of life after the year of the famed novel seem to outdo the literary proposal. Three decades after 1984, futurism has disappeared – utopia and dystopia fall short in explaining the current conditions we are facing – but futures, it seems, became the only available articulation of our experience of time. Orwellian closed-circuit-television and monitoring devices, global positioning systems and aggregated movement control, have come to define our image world and to dominate our political imagination. With code, mega-servers and Big Data, Gilbert Simondon’s proposal for what he called Techno-Aesthetics sounds romantic and even naïve: “aesthetics is not only, nor first and foremost, the sensation of the ‘consumer’ of the work of art. It is also, and more originally so, the set of sensations, more or less rich, of the artists themselves; it’s about a certain contact with matter that is being transformed through work. One experiences something aesthetic when one is doing a soldering or driving a long screw.” 1

Contemporary Techno-Aesthetics has more to do with high-frequency trading, than it has to do with the experience of a user, be it a producer or consumer. With most of the images today made ‘by machines for machines,’ the technological device might have an aesthetic experience, but we don't know how to see it; these images are invisible to us.

Still, there were moments when Techno-Aesthetics held a promise for emancipation. Alexander Bogdanov’s early systems theory “Tektology,” conceived in parallel and sometimes as part of the Bolshevik revolution, is one of them. Bogdanov developed a universal organisational science, which probed common isomorphic patterns that cut across all levels of psychic, social, and material phenomena. Heralded as a progenitor of modern cybernetics, Bogdanov’s Tektology did not see a fundamental difference between the organic and inorganic, concrete and abstract. Even after his expulsion from the party by Lenin, his influence was discernable in Sergei Tretiakov’s influential 1923 essay “Art in the Revolution,” where the author, a close colleague of Sergei Eisenstein and a dominant intellectual figure of Soviet Avant-garde, calls for the replacement of representationalist and reflectionist methods of art production by ones based on organization. 2 Today, visual production is certainly organized. Image production no longer addresses the retinal spectator nor the conscious viewer. In the last three decades most images produced involve surveillance, computer generation and search engines.

Pennacchio Argentato shared with me some texts that interested them in relation to their recent work. In one of them the author proposes to learn to look at images like machines look at them. “This question seems to come out of a Philip K. Dick book” the duo say, “because the machine becomes human and the human becomes machine. The eye is a device, the vision happens in the brain, for the machine too the eye is a device and the vision happens in the machine, and we have no access to this vision. These images are invisible to us only another machine or an algorithm can process and make sense of Big Data. So we don't know anymore what is the human and what is the machine.” 3

From Dziga Vertov’s 1924 film Cinema-Eye (KinoGlaz), where the eye is the camera, taking part in the revolutionary transformation that is Communism; to Dalí and Buñuel’s Un Chien Andalou(1929), where the razor cuts through the pupil like a summer night’s cloud gliding next to a full moon; to Hitchcock’s Rear Window(1954) where photojournalist L.B. Jeffries (James Stewart) exchanges the camera for binoculars as he watches his neighbours and is being watched by them; to Kubrick’s A Clockwork Orange (1971) where Dr. Brodsky (Carl Duering) applies the “Ludovico therapy technique” on homicidal Alex (Malcolm McDowell), forcing him to watch, through the use of specula to hold the eyes open, endless violent images – the eye is not only a sensor and a receiver. It is an object and an image. From symbolizing the introspective conscious mind able to take part in the world and reflect upon it through the act of seeing, the eye as an image came to epitomize penetration, subordination and control. The “all seeing eye” changed its meaning from observation and knowledge to surveillance and data.

This ‘story of the eye’ is the story of neoliberal optics. Armenian-American inventor Luther George Simjian’s professional biography connects Automated Teller Machines, the teleprompter, the photo-booth and the flight simulator. Simjian took part in developing many technologies that have set the stage for neoliberal optics, meshing together entertainment and surveillance to a degree that makes them inseparable. Images are produced through distributed and networked optical technologies that constrain and manage forms of subjectivity conducive to neoliberal governance. Neoliberal optics operate through technologies of subjective affective engagement and subjective extension fragmentation. 4

The “selfie”, in this respect, would be a good example of a self-inflicted, self-produced and self-managed image-production mechanism under the conditions of the neoliberal surveillance-entertainment nexus. A possible inverted precursor for this phenomenon of excessive production could be found in the example of Soviet Shockworkers (udarniki). These highly motivated ecstatic workers, stormed the factories and exceeded their designated quotas in the service of Soviet productivity. Replacing Taylorism as the model for labor in the USSR, shockworkers embraced the thrust of the machine as their own pulse. Under neoliberal conditions of labour, in which production has been replaced by consumption, we encounter new forms of over-productivity now occurring through the mobile image 5 – from the war-machine context of the Abu Ghraib torture and abuse photos to the exhausted, yet manic, subject producing and distributing his self-image.

Being less about production and more about circulation, our shockwork exhausts various gestures and practices that seemed just a few decades ago to hold substantial critical weight. One can observe how forwarding and Tweeting have made appropriation strategies redundant. We now find ourselves compelled to discuss the subjectivity of objects, rather than their subordination to our will.

The comparison to Soviet shockwork enables us to observe how we experience time today. While for them, the future was theirs and they stormed it, for us, the future entails a totally different meaning. Maurizio Lazzarato explains how under finance it is the future that controls the past and present: “All financial innovations have but one sole purpose: possessing the future in advance by objectivising it”. He writes, “This objectivation is of a completely different order from that of labour time; objectivising time, possessing it in advance, means subordinating all possibility of choice and decision which the future holds to the reproduction of capitalist power relations. In this way, debt appropriates not only the present labour time of wage-earners and of the population in general, it also pre-empts non-chronological time, each person’s future as well as the future of society as a whole. The principal explanation for the strange sensation of living in a society without time, without possibility, without foreseeable rupture, is debt”. 6So debt has a time-machine-like quality that freezes power relations. Vacant from utopia, our future is unfuturustic by nature. It promises nothing for us. Debt forecloses our future. Finance, which is a speculation on debt, colonises the future, and this future now haunts us. Speculation, says Joseph Vogl is an “assault of the future on the rest of time.” 7

Plasticizing debt, materialising it into objects, how do things, actual things, look like and behave? Pennacchio Argentato’s titanium body parts present us with silver, low density and high strength human scale limbs. These lustrous objects are made of transition metal, highly resistant to corrosion. The organic and inorganic have been reorganised. One can observe how prostheses are no longer designed to replicate human organs. They do not aim to merely compensate for amputated human limbs; they provide enhanced performance. 8 Human and machine, system and presence, data and experience, the bodily and the artificial, control and disorientation - thirty years after 1984 Pennacchio Argentato sketch out for us the outlines of speculation and counterspeculation.

1 See: Gilbert Simondon, “On Techno-Aesthetics” (a letter by Simonson to Jacques Derrida dated July 3rd 1982). Translated by Arne De Boever, Parrhesia Journal, No. 14, 2012, p. 3
2 See: Sergei Tretiakov, “Art in the Revolution and the Revolution in Art (Aesthetic Consumption and Production),” in: October, No. 118, Massachusetts Institute of Technology, Fall 2006, pp. 11–18
3 Conversation with the artists
4 See: Mark Hayward, “ATMs, Teleprompters and Photobooths: A Short History of Neoliberal Optics,” in: New Formations: Journal of Culture/Theory/Politics, Volume 80-81, 2013, pp. 194-208
5 Although applying it in a different manner, Cosmin Costinas, Ekaterina Degot and David Riff have coined the term “Shockworkers of the mobile Image” for the title of the First Ural Industrial Biennial of Contemporary Art, which they co-curated in Ekaterinburg, Russia, 2010 6 Maurizio Lazzarato, The Making of the Indebted Man, Semiotext(e), 2012, pp. 46–47
7 See: “In The Pull of Time: a conversation between Joseph Vogl and Philipp Ekardt,” Texte Zur Kunst, No. 93 - Speculation, March 2014, pp. 108-120
8 Oscar Pistorius “Blade Runner” carbon fibre legs, qualified him as both Paralympic and Olympic athlete. These days, the South African sprinter is standing on trial for murder in Pretoria. He claims he shot his girlfriend, Reeva Steenkamp, because he mistook her for a burglar. Court experts debate whether or not he wore his prosthetic legs when firing the gun. This attempt to narrate the circumstances of the killing of Steenkamp resonate with something Pennacchio Argentato mentioned in conversation: “As P.K.Dick often describes it, in the near future the rich person might never die, might be young forever, but the poor more likely will die, will get old and will be left behind, because it will be just human, that will mean that to be just a human will not be enough. Technology made us human in the first place because it extended our abilities and possibilities since the invention of fire, from the stone age to the digital age, technology has defined our being in the world, and it's precisely the technological enhancement that would make us transcend our humanity more and more in the future, but is this possibility going to be extended to everybody?
www.amandawilkinsongallery.com