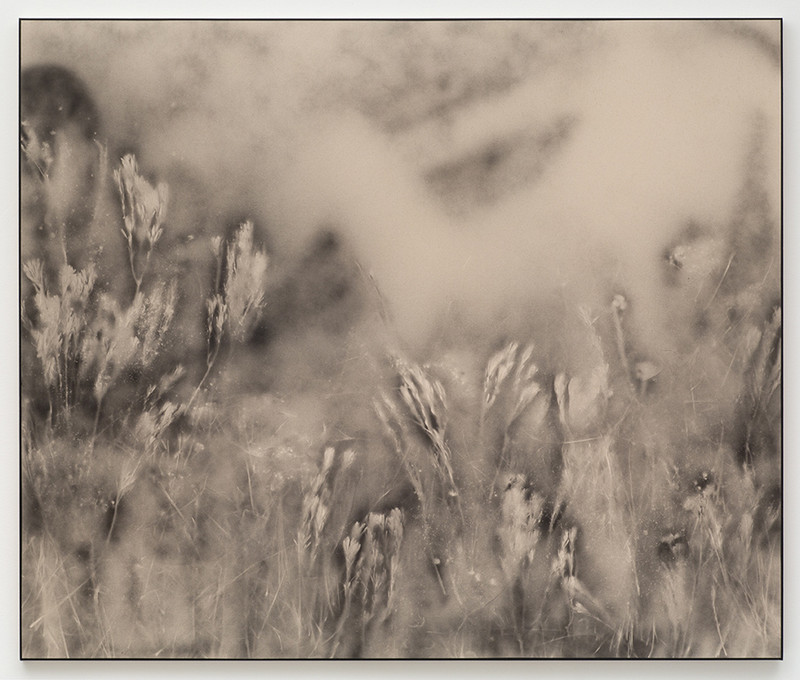 An indeterminate outline of a rotund figure is lying on a patch of grass. He or she leans back with arms stretched behind, supporting their head. Overgrown foliage in the foreground partially conceals their body. The image is rendered through a fine black mist and the landscape seems placeless yet distinct. Are we catching the figure resting after a short swim, or an interlude during a long walk? Does the scene portray a beatific spring day, or, perhaps something more ominous?

In Phoebe Unwin’s new paintings we intrude on a figure, or figures, lounging in pastoral surroundings. In some images, parts of a body are depicted; a bent elbow and some crossed knees glimpsed through the long grass. Body parts start to echo the composition of the plants around them, forming a visualreverb. In a series of smaller paintings we see an unfinished drink, a thin plait and a mobile phone gripped tightly. Someone stretches out their arm so we can see their watch; through the painterly fog we can just about work out that it is 4 o’clock. These commonplace and incongruous situations appearin soft focus, seen through a haze that dissolves the distinction between skin and stuff, the subject and their surroundings.

To use Unwin’s phrase, the characters are surrounded by ‘self-soothing objects’ — wired into headphones and engrossed by mobile phones. The smaller paintings are cropped closely on parts of the body so that ears, limbs and fingers appear isolated. The objects become prosthetic devices, focusing attention inwards and away from any determinate surroundings. The distance explicated in Unwin’s paintings and their titles is both physical and physiological. Someone listening to music on their headphones is present and unavailable — they are physically near us yet emotionally remote. While the awkwardly framed bodies of the large canvases provide some expressive potential, the faces in Unwin’s paintings are, typical of the artist’s work, oblique. Beyond the cursory depiction of a nose or some hair, each figure’s momentary emotional experience is intimated through their languid poses. Unwin places great emphasis on the gestural in her painting and it is the body, rather than the mouth, that is continually tasked with communicative agency.

The porous surfaces of these works on clay board and raw, sized canvas give the figures an immaterial quality, and the feeling that they could blow away in the wind at any moment. The lightness and quickness of airbrushing give the images an airiness and one can draw analogies to a kind of virtualised and weightless drift of networked life. The delicate white surfaces of the smaller paintings register a richer variety in tone in contrast to the works on canvas rendering their subject more proximate and palpable. The characters become proxies; partly fictive, and partly remembered. As if made of smoke, the vaporous figures dramatise a situation where everything seems to be at hand while remaining slightly out of reach producing a kind of painterly mirage.

Unwin’s previous work has been marked by a formal itinerancy and chromatic exuberance. These new works, with their temporary disavowal of colour, offer a more plaintive register. If historically the pastoral has often been a place of escape from the demands of modernity for Unwin it serves as a nuanced backdrop for a study in technological atomisation. The ‘self-soothing objects’ depicted in the closely cropped clay-board paintings and their smooth ceramic-like surface produces a much denser black than the canvas. This density analogises the intimacy that we project onto our devices. The clay boards, unlike the canvasses, record every scratch in the process of their production. Like the tightly gripped smart phone screen, with its greasy finger prints, the surface of these paintings are marked with the residue of human interaction. In the process of making the larger paintings Unwin lays flowers to their surfaces, masking areas from the indian ink. The resultant negative silhouettes evoke the process of a photogram and the shapes feel more solidified than the diffuse lines that describe the figures. The foliage’s one to one indexicality counters the subtle shifts in scale that the figures encounter. While the landscape is stable, the body is fugitive. This visual distortion parallels what is felt as much as what is seen.

Writing in How to See the World, 2015, the media theorist Nicholas Mirzoeff articulates the process of looking as a complex relationship between the retinal and neurological. According to Mirzoeff, our brains operate more like a sketchbook than Image on reverse: Small Head with Headphone, 2015 Indian ink on kaolin clay on board 40.7 x 30.6 cm (16 x 12 in) a camera. I am reminded of this when looking at Unwin’s paintings. Painting, much like writing, is a translation of looking through the filter of memory. Through the precarious way that a straw sits in a can, to the stiff posture of a shy figure, Unwin dramatises the ways that memory bleaches out significant moments while embedding incidental details.

The significance of the airbrush for Unwin in these new paintings (this is the first time the artist has worked in series) is formal and richly symbolic. The airbrush was invented in the late 19th century and one of its uses in the pre-digital era was for altering photographs. The deployment of the airbrush — from doctored news images, Eighties Athena posters to spray tans — has often been focused on the production of fiction. Unlike the Athena poster, Unwin’s paintings are not idolisations or archetypes but, rather, they attempt to amplify the circumstantial; to make the everyday memorable. Importantly, Unwin moves beyond the cosmetic, and through an attuned sensitivity to materials, explores the affective resonances of the commonplace.