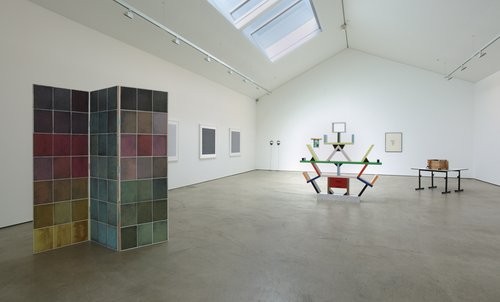 Wilkinson Gallery is pleased to announce their Summer Exhibition curated by Michael Bracewell. ‘Room Divider’ is a group exhibition which celebrates the relationship between Romanticism and the machine aesthetic. At its centre is a response to the cyclical phenomenon of modernity appearing to reach critical mass. A contemporary audit, therefore, on the enduring concerns of Twentieth Century Modernism, the exhibition combines the aesthetic languages of computers, furnishing, pop styling, film, interior design, comic books, dance, technology, collage, electronic music, Post-industrialism, the Bauhaus, advertising, Memphis design and punk.
The exhibition pursues a thesis proposed by two fragments of text, written nearly forty years apart but conveying a similar notion of temporal disorientation and, vitally, the amalgamation of American Mass Age glamour and European intellectualism. The first is from F. Scott Fitzgerald’s novel of 1934, ‘Tender Is The Night’, during which two of the characters attend a cocktail party in an aggressively modernist Parisian mansion: “No one knew what this room meant because it was evolving into something else, becoming everything a room was not...”
The second is taken from Simon Puxley’s sleeve note for the first release by Roxy Music (self-titled Roxy Music), in 1972. Slipping into a Beat interpretation of a society reporter’s breathless prose, Puxley (an academic, specializing in Victorian poetry) reports from a mythic cocktail hour: “...what’s the date again? (it’s so dark in here) 1962.... or twenty years on...”
‘Room Divider’ thus essays cultural historical connections between Twentieth Century iconography and contemporary art. It engages with allegory and symbol to articulate the psychology of Post-industrial folklore.
Throughout there are held tensions: between machine and sensuality, nervousness and languor, seriousness and jest, nostalgia and futurology, chaos and order.
The seductively bewildering, mythic interiors described by Fitzgerald and Puxley are at once concerned with glamour and disquiet; they are spaces that both enchant, and seem to promise disenchantment. They dazzle, yet are inscrutable in their super-modernity; at the same time, they appear possessed of covert knowledge and foresight. They mark a fissure in time, perhaps, through which intimations of the past and the future become fluid and questioning – joke or prophecy. In this they are the terrain of the Dandy and the Exquisite, and the art form as aphorism. And as such the values of surface and depth, face and mask, decoration and icon, become ceaselessly self-reversing.
The artists included in the exhibition are: Nicolas Ceccaldi, Richard Hamilton, Tim Head, Gareth Jones, Linder, Simon Martin, Pet Shop Boys, Xanti Schawinsky, Christoph Schellberg, Hanna Schwarz and Ettore Sottsass.
Michael Bracewell is the author of six novels and three works of non-fiction, including ‘The Conclave’ and ‘Re-make/Re-model’. He writes extensively on modern and contemporary art and was co-curator of ‘The Secret Public: Last Days of the British Underground, 1978 – 1988’ at Kunstvererin, Munich and I.C.A. London, and ‘The Dark Monarch: Magic and Modernity and in British Art’ at Tate St Ives.
www.amandawilkinsongallery.com