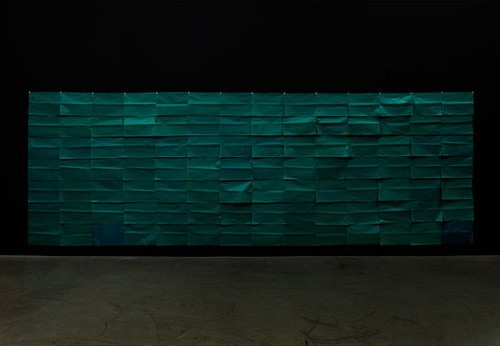 I thought of a room as a box, from which a story vibrates, and I began to think about the constant occupants of rooms. 'In the Room' series focused on captives (the tortured), an actress on stand-by for her secret lover, a dog, a radio host, a traveller in a city and so forth as the room occupants (and vibrators of the hidden boxes). I knew that male humpback whales of one population in a breeding season sing the same song, but each time this song is sung, it varies through imitation and improvisation. I thought of both performances and stories within those performances as versions of variations. Plain phenomena are not more exciting than they are, but they are often told otherwise through exaggeration, deletion, intonation, and rhythm, texture of voice, and usage of time, as fairy tales, myths, magic, lies, propaganda, history, or sometimes, fact. 'Summer Days in Keijo', 'Dog video', and 'From the Commanding Heights...' spun off from this series. Most of the songs from the 'In the Room' Series will be published separately as dogr's album, 'In Korean Wilds and Villages'. In this form, I recognize that the authorship of these stories is conferred to another medium, another language, another culture, and another man.

Wilkinson Gallery is pleased to present the second show in London of New York based Korean artist Sung Hwan Kim. Having previously shown From the Commanding Heights... at Wilkinson in November 2007, this exhibition Pieces From In the Room brings together further elements from the series. Recently shown in different scales and variations at his solo exhibitions at Witte de With, Rotterdam and Gallery TPW, Canada, the works in In the Room have been developed in parallel to live performances and concerts in collaboration with dogr (aka David Michael DiGregorio), who often assumes the role of the narrator of the series.

Downstairs the gallery stages an intricate installation version of Dog Video, comprising of sculpture and drawing to create an immersive environment. Dog Video was part of the performance, In the Room 3, first performed at STEIM, Amsterdam in 2006. One of the new elements in this exhibition is the documentation of the performance, Pushing Against the Air, 2007, first performed at De Appel, Amsterdam and Project Art Centre, Dublin. The Drawing Video installation includes a video extracted from a live performance of Pushing Against the Air. Upstairs Kim shows Summer Days in Keijo (2007), which was one of the highlights of the 5th Berlin Biennale 2008.

dogr's album In Korean Wilds and Villages consists of many of the songs developed in Kim's performances and videos. Released through Sonig Records the CD can be purchased from the gallery priced £15.

Sung Hwan Kim will be exhibiting a collaborative project with Joan Jonas at Art Basel 40, Art Premiere, Basel, where on the 10 June 2009, 1 - 1.30pm, Kim will be in conversation with Jonas to launch the publication of Sung Hwan Kim's new book published by Witte de With, Rotterdam. For 2010 Kim is working towards a four person show at Haus der Kunst, Munich with Steven Claydon, Diango Hernandez and Mai-Thu Perret, a solo exhibition at Tranzit Gallery, Prague and a new performance work to be presented at the New Museum, New York.
www.amandawilkinsongallery.com