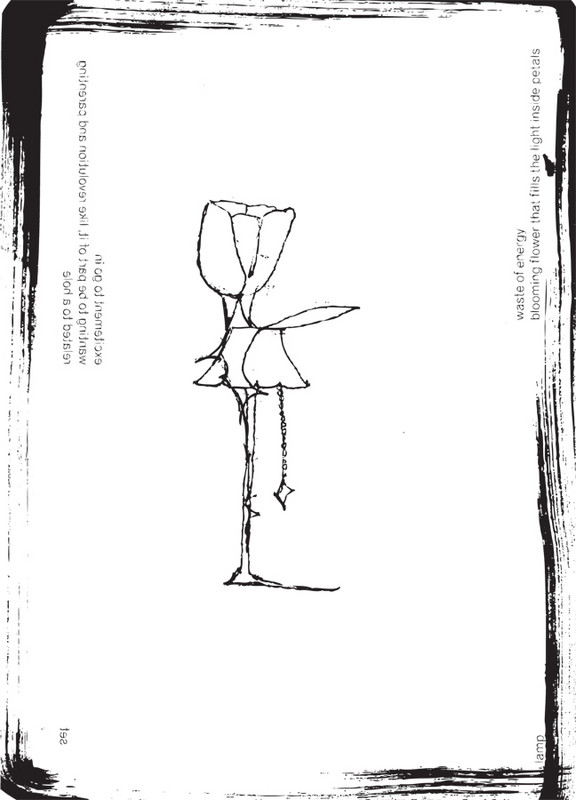 Pink sheets slip out from a sturdy black book with a silver spine. Inside are drawings, speech bubbles around sketched figures, and transcriptions (by a non-German speaker) of Rainer Maria Rilke’s poetry. We see the figures and what they have to say, and often on the following page the same figures in reverse overlay another drawing. The tenor of nostalgia is present throughout the book that ends with a new story that comes out of all of this. The heavy book is made of fragile material. Pages fall out and edges tear easily. It is not one of these objects that asks to be used recklessly, however. It needs to be handled with care.
---
Taking the book, flipping through its pages, pilfering, reading into and inviting it to perform across media. When a person behaves in this manner—be it the person performing the transcription or the person viewing it—the text becomes something else, something autobiographical, physical, and real. Yet it also enables a self-forgetting. As Simone Weil writes, “It is all the more necessary when reading documents to read between the lines, to transport oneself fully, with complete self-forgetfulness, into the events evoked there, to stop and examine at length the small, revealing things and discern their full significance.”
The immersion is a release.
---
What does where one writes or draws say about the subject at hand? Is the questioninconsequential or relevant? How does it affect one’s reading? Ki-da Rilke is an object that evokes these processes. Where the drawing takes place and its potential importance might be secret knowledge for the most part. We can think from the book itself. It reads between and through the lines. Both the drawings and the writing are part of another kind of exchange gathering up the evidence of disturbances that happen any time we wish to translate or go from one text to another, from one place to another.
If one performs the act of drawing or writing in a café, does the location matter? Urban activist Jane Jacobs writes about the importance of sidewalks and what occurs on them.
She writes of the difference in taking the advice of a shopkeeper on the street, versus that of a neighbour in a strictly residential zone protected from the city. The former type of contact builds a community the latter cannot; the former strikes a balance between public and private whereas the latter gets stuck in “sharing much or nothing.” Exchanging information can be a sensitive experience; the information becomes less important, a subtext to the interaction.
What is the time of that interaction? Is it wasted? If we think of time as wasted, is it easier to spend? Wasted time could also be the place for nostalgia. Images move there, thoughts occur, it is not a time during which we try to move past what is before us. Ki-da Rilke is part of a practice that often treads in nostalgia, one that incorporates film and text, and takes in what happens on the sidewalks of cities­—New York, Seoul, and Amsterdam for instance—playing with the visibility of people and lack thereof on 16 mm film, or letting the narrative be out of step with the story that whizzes by on screen. One sees not just how a text or drawing or film is read, but how it is at play. It is a work ready to speak when it, and we, aren’t yet entirely sure of what needs to be said.
www.amandawilkinsongallery.com