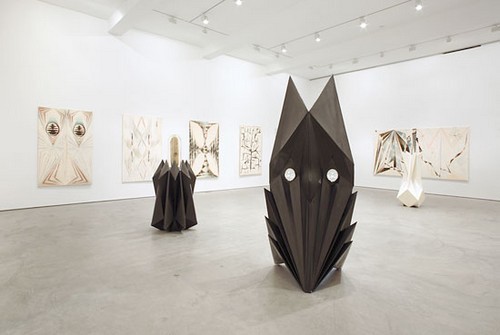 Wilkinson Gallery is pleased to present an exhibition by Austrian Artist Tillman Kaiser. For his London solo debut titled "Hallucination Engine", Tillman Kaiser presents a vivid series of mixed media paintings, sculptures, and outsized wallpaper. With his subdued palette and formal geometric symmetry Kaiser has developed an offshoot visual language of the Gothic forms found in his native Austria. His paintings are rhythmic undulations on the splintered image data that informs us in a thousand ways each day. Human and insect eyes, African faces, anonymous Modernist sculptural forms, and mid-20th century industrial objects alternate and converge into seemingly low spectrum patterns and waves.

Amidst the stripped down psychedelic, Op Art aesthetic and fanciful Modernist underpinnings, Kaiser collates the information into witty urban conceits. The anomalous associations reverberate with much of the archetypal imagery found in Western and primitive cultures such as architecture, public monuments, masks and totems. Large constructivist sculptural forms that play off of the paintings highlight a dystopic sci-fi element. There are ready-made components positioned atop or within the graceful cardboard constructs. Painted in black India ink, blunt enamel gray, or neutral flat white they appear as benevolent talismans born from alien technology.

With its slow time analog residue, Kaiser's art runs anomalous to the high-speed virtuality surrounding the real world. Kaiser elevates the banal overload aspects of global cultural noise into riffs on our shattered hierarchies. Using a coded visual alliteration he is a storyteller of a reality that cannot be seen, but is always subject to a psychic connection between the conscious and the subconscious. It is the temporal offspring of an occult interest in the uncanny and infinite universal strings that makes us connected.

Through the lens of an updated abstract constructivism, Dada, and surrealism Kaiser sifts through the old outmoded cultural signifiers, delineating a value towards certain picture constructs within the new ones. As containers of foreignness and familiarity they work on numerous subjective levels. Taking us down the hypothetical wormhole that is the order of the day, a kaleidoscopic epiphany awaits those that can decipher its algorithms.
www.amandawilkinsongallery.com