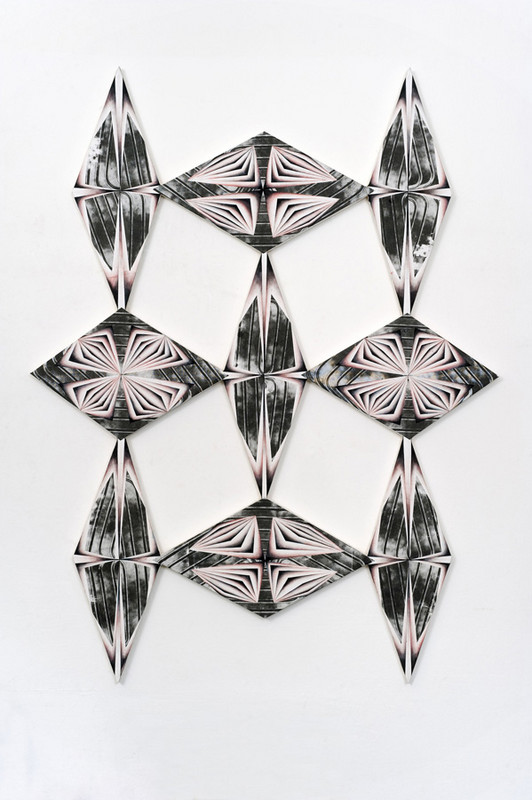 Consider the title of the exhibition, ‘The Truth and the Abstract Blues.’ It is appropriated from a jazz album title (Oliver Nelson, et al., 1961), then cutup, collaged. And like all collage it thus contains a measure of passivity, a degree of chance, which act to maintain a certain distance between creator and meaning, a padding which I don’t think Tillman Kaiser would be comfortable without. Certainly it’s a distance he needs to maintain between himself-as-artist and his artworks, wherein collage serves the same purpose.
In knowledge of this, let us entertain an interpretation of the title. The Truth is the state of grace such as was known to Adam and Eve in the garden of Eden, the truth of man in his natural, unreflective state; and the fruit of the Tree of Knowledge is Abstraction, both damning and foundational to all culture and society. The source of all Blues.
This is how we have understood that Christian myth throughout the modern era, at least, through the lens cut by Darwin, polished by Nietzsche, and focused by Freud. (Remember that the premoderns with their strictly ecclesiastical worldview interpreted the damning Knowledge as sexual in nature, which produces an entirely different spin on things.) Think back to the basic premise of Society and its Discontents (1929). The ability to abstract one’s behavior from one’s immediate impulses is named by Freud as the key to society in its originary operation: regulate one’s desires to kill and to copulate in order to cooperate with another to achieve a common goal, which is recognized to have mutual interest and benefit. This is the fundamental Abstraction. And it is the beginning of unsatisfied desires, too. The fundamental Blues.
At least that’s how we have understood the matter throughout the modern era, through the lens of Darwin, Nietzsche, and Freud.
But are we to understand Kaiser to be channeling a modern worldview in his practice? Obviously his work is suffused with the various avant-gardes of the period, from Futurism right on down to Primitivism, with stops along the way to pick up tricks from Surrealism, Dadaism, Fluxus, et al. Yet the attitude at the heart of such borrowing is antithetical to these sources: which of the 20th
Century avant-gardes can you imagine having, as Kaiser does, so boldly and laconically appropriated from the movements of a century before?
Old stuff given new shape by a new attitude. That’s contemporary art, and especially painting, in a nutshell. Perhaps that’s part of the reason why attitude has come to be what counts above all in contemporary art. Because it is the locus of value now. Or, put otherwise, artistic attitude is the place where new values are tested against the old. Perhaps it was ever so, but assuredly it was never so distilled as today.
Artistic attitude trumps technical apparatus; thus the new attitude trumps the technical innovation. And attitude is not style; style is rather that which arises from the meeting of attitude and apparatus (at the border between subject and object, as it were). In considering Kaiser’s latest shaped-canvas works, then, or his wire-frame sculptures, we may say that they are more “stylish” than anything to come from the artist to date, in the sense that his technical discoveries serve to distinguish his artistic attitude more definitely than ever before. And it is to the new values of that attitude that I want to draw attention, in favor of celebrating the work’s material originality.
Better than ever before I see it: the estranged familiarity with the central problem of modernity, the communion with the universal truth that every utopia (read state of grace) must in practice be always-already dystopic. It is an attitude which suggests that we might not suffer so pointedly from our abstractions, if we were only to accept their limitations as far as achieving Grace goes—which is what the blues are all about, right? Mournful self-acceptance. All of which is to say that Kaiser’s is an art that draws a line between itself and the 20th Century by seeking, not to be different, but to exist differently. A difference in attitude, in other words.
And across the spectrum of contemporary thought, doesn’t this attitude seem to be the hallmark of the 21st Century?
www.amandawilkinsongallery.com