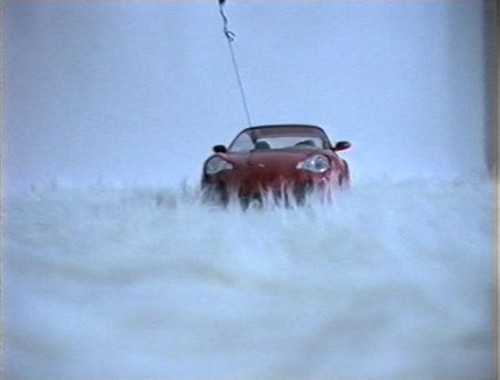 Anna Jermolaewa has got a gift. That of turning ordinary objects into something extraordinary. And she does that without resorting to any digital tricks. Her use of the video camera is as simple as the subjects she chooses: toys, in the case of this exhibition. There are no special effects added in the computer lab. There is no complex editing. The images unfold straightforwardly, the way life does.

Toys are dangerous things when brought into the contemporary art space. They are dangerous because of the risk of misunderstanding the artist for the adult who does not want to grow up, or, even worse, for someone who wants to speak to the child in every of us. Luckily, this is not Anna Jermolaewa’s art. The “games” she plays with her toys have very little to do with childhood, because they speak of the grown-ups’ world, of its dangers, obsessions, incongruities.

Anna’s toys have the power of being entertaining and scaring at the same time. The dolls are pretty little things, but they are doomed to fall one by one under the creepy sound of gunshots; the little car is amusing in its drive along a fluffy carpet, but it obsessively knocks against the camera’s lens (that is to say, against us, the viewers); and the dogs are cute soft little creatures, but their flashing eyes make them look like demons rather than friends.

These are very simple games to play. Although, behind them it is possible to glance at the complexity of the world we live in. Maybe, only maybe, they hide hints of the impossibility of sharing the same space without hurting each other, or being hurt by someone who wants to control us; of the obsession of keeping everything under constant watch; of the danger of using protection as an excuse to dominate. Maybe, only maybe.

Come and play with Anna! At your own risk, of course. You have been warned!